This week’s attractions at the Bilston venue. 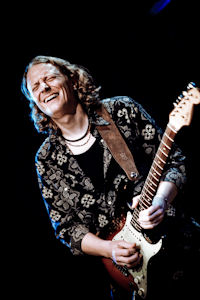 Tonight sees one of the brightest emerging blues talents of recent years in the shape of Matt Scofield. Already rated alongside the likes of Clapton and Peter Green as one of the top ten British blues guitarists of all time, Matt has won numerous awards for his work, including the 20101 Album and Guitarist of the Year crowns in the British Blues Awards. His latest album, last year’s Anything But Time.  Tickets £15

On Saturday there’s the return of eighties icon Toyah, who since her chart days has honed her act into a top-line live performance. She’ll be celebrating the thirtieth anniversary of her influential album The Changeling, which itself spawned the live follow-up Warrior Rock. There are four support acts and the fun starts at 7pm. Tickets £19.50

On Sunday Italian Genesis tribute the Watch will be at the Robin. Tickets £13