Alex Crawford OBE, four times winner of the Royal Television Society (RTS) ‘Journalist of the Year’ award, will deliver a talk at Coventry University next month as part of the free-to-attend Coventry Conversations programme. 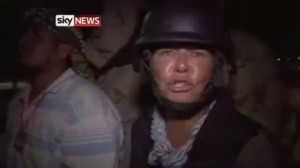 Crawford’s talk – Travels with my Camera Crew – will take place on Wednesday 9th May at 2pm in the Ellen Terry Building, Jordan Well, city centre.

The Sky News special correspondent, who is based in South Africa, won widespread acclaim for her bravery reporting ‘on the ground’ amidst the Arab Spring uprisings across North Africa and the Middle East.

She was the first reporter to broadcast live from Green Square in August 2011 as rebel forces occupied the area during the Battle of Tripoli, and became the only journalist to penetrate the besieged town of Zawiyah when it was being attacked by pro-Gaddafi forces.

On winning the RTS ‘Journalist of the Year’ accolade for the third consecutive occasion in February this year, Crawford was praised by the awards judges for her “complete mastery of the reporter’s art… remarkable personal courage and the ability to work under sustained pressure in dangerous places”.

In 2010 Crawford was named ‘Woman Journalist of the Year’ by Women in Film and Television, and the following year was awarded the ‘James Cameron Memorial Award’ in recognition of her outstanding contribution to journalism.

John Mair, senior lecturer in journalism at Coventry University and founder of the Coventry Conversations programme, said: “We are honoured that Alex has chosen Coventry University as a stage, and thrilled to be able to offer to students and the public this magnificent opportunity to come and hear from one of the world’s foremost figures in war zone reportage. It’s a testament to the growing national significance of the University and its increasingly popular Coventry Conversations programme.”