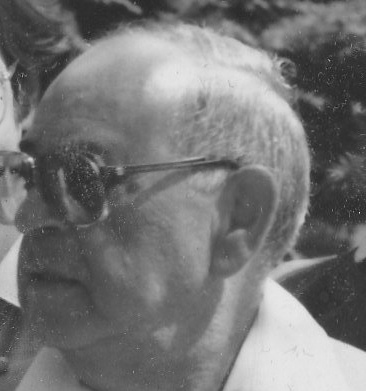 Unk in his heyday

This Sunday is the centenary of the sinking of The Titanic. But for Richard Lutz, it’s the 100th anniversary of something else.

You can’t avoid it. It is everywhere. The Titanic industry is at full throttle and bursts over the horizon on the fifteenth of this month- a hundred years ago the passenger liner sank.

It’s an arbitrary way to signal the disappearance of a ship with 1300 lives lost but at least movie director James Cameron will make a buck out of it by re-releasing his movie with new 3D bells and whistles. As will anyone serving on the HMS Titanic Marketing battleship.

But this weekend means something different for both  me and the maternal side of my family: the Lessem clan.

A hundred years ago, family tradition has it, my Uncle Harold was born. He came into this world on the day the Titanic hit that iceberg and went down.

Now let me clarify something here. He was born on 14th April, 1912. The Titanic sunk on the 15th. But, get this- it actually hit that chunk of ice just before midnight on the 14th. So, when the Titanic went wham, it was the same day my uncle burst onto the scene. And that’s official family history.

It’s fact: My uncle was born when the Titanic rammed an iceberg and began to sink.

Harold Irving Lessem was born in New York, one of six kids to Anna and Max Lessem- their only son.  My mother Alice was the the baby. Max himself was a man o’parts, a Brooklyn candy store owner , a dairy farmer (in the good years) and then back to owning a corner store during The Depression. He ended his days working for a New Jersey boxmaking factory.

No one really called Max’s son Harold by his real name. He was Lefty to his sisters and simply Unk or Unkie (both short for Uncle) to all his nephews and nieces.

Since he didn’t marry or have his own kids ’til he was in his early fifties, he was ours. When Unk came to town (or Lefty came to town to see his sisters), it was as if the circus opened.

He told stories that were both funny and scary (‘…not too scary..’); tested how strong we were (each of us was very strong indeed); smoked Luckies; and, practiced his golf on the living room floor with his portable golf hole and his inevitable left handed club. As he putted away, maybe his unfiltered Luckie, dangling from his lip, would drop ash on the new carpet and a sister would get in a tizz that Lefty went and sullied their décor. Again.

He babysat for us, seemed to be the default older adult that actually went into the sea with us so we could jump off his shoulders; and, recounted 84 carat stories- all true- about his own father Max escaping the dreaded Cossacks to take on the identity of a dead French war hero to eventually land in New York in 1898 (these stories do not add up but what 8 year old wants to hear the facts?).

‘He was Maxmillian Lessem- hero of the French Foreign Legion.’ Unk told us as he described Grandpa Max’s early days. We bought it wholesale.

Before Unk/Lefty/Harold married, he assured us he was engaged to a beautiful blonde who was a champion cha-cha dancer. She was never thirsty either- she continually swilled champagne as she shashayed the night away in the ritziest of Brooklyn’s nightclubs.

My cousin Josh burst into tears when Unk proudly brought his real fiancée Selma to the family house. Unk had abandoned us for a good decent Bostonian woman. Word has it Josh cried right through that wedding over the loss.

After getting out of the Army,  Unk worked (for all his life) for the National Park Service and was boss of big monuments such as Fort MacHenry in Baltimore (which all proud Americans learned was where the Star Spangled Banner was written), Civil War battlefields and bigtime historical sites in New England.

Family lore has it he was handed the Badlands in South Dakota to supervise early in his career but turned it down to stay near his Yiddish mother and the rest of the family.

To us, the most important thing about his job was it gave him the right to wear a brown Park Ranger uniform. It came with a wide brimmed hat. A nephew or a niece (or maybe his new bride in some madcap week end) was allowed, as a special treat, to wear it during family get togethers.

Here he is with my brother Billy sometime in 1954. He’s giving my brother ‘The Big Tickle’. It was one of his specialties. 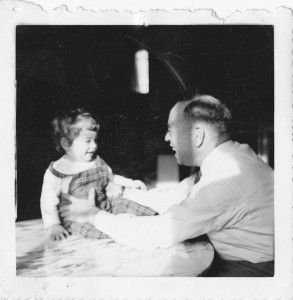 Unk’s undying passion, besides his family, his golf and his Luckies, was photography. He only shot in black and white on a Leica and developed his own work. He had a darkroom set up wherever he was posted and he first showed me the magic of producing your own pictures when he was superintendent at the Customs House Historical Building in Salem, Massachusetts.

He shot with that German camera while the rest of us were snapping away with Brownies, Kodak Insta-matics and other handheld junk that got forgotten after a summer holiday. He shot mostly family portraits and nature.

Here’ s shot he did on the California coast: 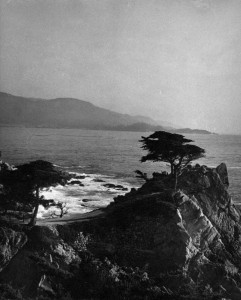 After marriage, Unk became the father of his own two children…boys. Here’s one of his pictures of his eldest, Miles:

Unk wrote about the Civil War for government archives and retired in the 1970’s. He grew old and family trips usually included a visit from him in his banged up Plymouth or a drive down through Jersey to see him in his infirmity in his home outside Philadelphia.

He died in 2002, still railing against governments, Reagan, Bush and adventurist foreign wars that were morally wrong and sapped the strength of the country.

So, for my many relatives, this is what this week end will mean- a celebration of Unk’s 100th birthday.

That is, if that really is his birthday. Unk, when it comes down to it, had a way with stories.