Andy Munro goes to Brighton with the Blues.

It must be because we are the most landlocked city in the UK that whenever we’re drawn away at the seaside (perhaps Grimsby excepted), tickets become like the spent stuff of rocking horses. 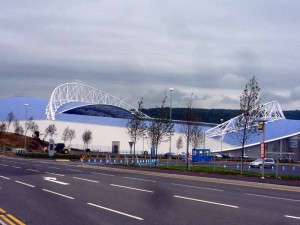 As a season ticket holder with only the occasional away match to my name, I knew it would be a big ‘ask’ to be Brighton bound. First I tried a contact through a Blues sponsor but that turned up a blank then I looked on the Brighton website but it had just got the ominous words ‘sold out’. My daughter lives in Brighton but she also drew a blank and, more in hope than expectation, I asked Big Dave ‘Flashman’ from Made In Brum to keep a look out ,as he sold the fanzine..

Result! Dave, as usual, came up trumps and I found myself on a number 25 bus on the way to the Amex Stadium which aptly-named could have been in America, the length of time the journey took. After collecting my ticket from Dave, who was pleasingly selling the MIB fanzine and badges like hot cakes, I went straight into the stadium and I must say it’s a fabulous ground both inside and out.

I had a swift pint; at £3-60, I suppose it was not so outrageous at today’s outrageous prices. In fact, I nearly had a glass of wine at £3-80 but Al Murray’s phrase ‘a glass of white wine for the lady’ sprung to mind and made my decision to stick to bitter!

Early on in the game it was Brighton who looked the liveliest and Doyle pulled off a couple of great saves; nice to see him back but hopefully we can think of a better chant than repeating ‘Colin Doyle’ over and over again. With Brighton’s Spanish contingent looking as if they were in training to enter the Olympic diving event, Gomes found himself booked early on. Consequently Chris H wisely took him off and, even more wisely, brought on Nathan Redmond.

At one stage it looked as if it might end 0-0 but then the consistently unimpressive Husekleppe went off and, as he did so, I turned to the bloke sitting next to me and said “We need to play Redmond down the centre as he’s difficult for defenders to pick up.” Call me Chris Hughton but that master stroke came to pass and, after some great work by Marlon King, Nathan rifled the ball home. Andros Townsend then came on and he looked to be having one of his more impressive games and all looked set fair for a Blues win. However, it wasn’t to be and I think a draw all said and done was a fair result which sees us into the playoffs.

The attendance was just over 20,000 with a decent number of empty seats in the ‘home’ section so it seems that their ‘sold out’ website message was probably designed to deter rogue Blues fans. It seems a shame because it was a cracking atmosphere and the Blues fans were in good humour and fancy dress. Chuckie, Superman, English knights and policewomen to name but a few. However, my favourite was a bloke wearing a grey wig, a slight limp and an old Blues shirt with ‘Rushfelt’ on his back. Undoubtedly, even in that state, he would have eclipsed the original article. Who knows, we might even need him the way our injury list is growing.