The Birmingham Press is pleased to announce that Debra Davis, City TVs Chief Executive, will be the speaker on behalf of the “Vote Yes to a Birmingham Mayor” campaign. 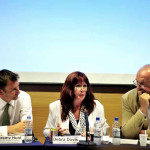 Debra has had a thirty-year career in communications starting in Montreal in the creative department of an advertising agency, followed by 17 years in Ottawa working for three Prime Ministers (Rt Hon Pierre Trudeau 1979-1984; Rt Hon John Turner 1988; and Rt Hon Jean Chretien 1989-1997). Debra joined the Department of Foreign Affairs and International Trade in 1997 and was appointed Counsellor (Public Affairs) to the Canadian High Commission in London in August 1997. Debra has been appointed as City TV Broadcasting’s Chief Executive following three and half years as the Director of Public Affairs and Communications for Birmingham City Council.

Giving a critique of a case for mayors will be Les Reid: Midland Journalist of the Year 2012 –  also winning the Daily News Reporter of the Year Award at the same time. Les is full-time political correspondent of the Coventry Telegraph.  He’s been a journalist for twenty years and wrote for The Guardian on MPs expenses claims. Les writes for The Guardian and New Statesman as well as other national and local papers. Les is a critic of the Government’s position on elected mayors.

In the Chair will be Karen Leach who runs Localise West Midlands, a not-for-profit think-tank, campaign group and consultancy, which promotes localisation for social, environmental and economic benefit. 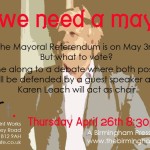 The debate takes place on Thursday, April 26th from 8:30pm at the Ort Cafe on Moseley Road, Balsall Heath, opposite Edward Road (and almost opposite the baths and library).

Entrance is free and the debate starts just after 8.30pm.

The format will be simple – five minutes from each speaker to start with, then a public debate with questions to the panel for around 45 minutes, followed by a short summing up from both speakers and then a vote.

NEW: You can download a fact sheet put together by The Birmingham and Localise West Midlands  for some background to the Mayoral referendum on May 3rd.