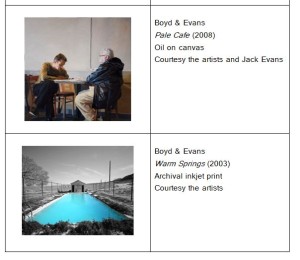 Ikon presents Boyd & Evans’ first major survey exhibition, comprising painting and photography drawn from the artist couple’s 40 year career. Their paintings, while highly realistic, have a scale, composition and use of perspective that often edge closer to the surreal. In these dreamlike pictures the air feels thin and time suspended. Photography has been integral to Boyd & Evans’ work as painters; more recently they have explored this medium in its own right. With selections from 1968 to 2012, Views tracks their practice from painted scenes of middle-class leisure in 1970s Britain to penetrating photographic landscapes of the American Southwest.

Boyd & Evans have been working together since 1968. In the first decade of their  partnership, they created stencils drawn from images in their own photographic archive, spraying acrylic paint through them to create an even, thinly painted surface. Assembling disparate elements from different photographs allowed them to create new, mysterious compositions, which the viewer is left to ponder. Their use of photography, spray guns, square canvases, even their decision to work collaboratively, can all be seen as strategies to shift focus away from the hand of the artist and toward the viewer’s imaginative play.

Vision itself has been a longstanding concern for Boyd & Evans, with many works suggesting the conditions of seeing or being seen. Views 1 and 2 (1973) – paintings from which this exhibition takes its name – show in the first canvas a girl with her back to the viewer, looking out toward a group of people and some cars parked incongruously in the distance. In the second painting she turns, as in a photographic snapshot, and smiles directly at the viewer. The initial puzzle about the relationships within the painting becomes a startling, if light-hearted, confrontation between the figure and her beholders.

In the 1980s and 90s, Boyd & Evans abandoned the spray gun in favour of brushes, but continued to be inspired by photographic imagery, with an increasing emphasis on landscape. Lone figures are set within sweeping, panoramic vistas traversed by railroad tracks and asphalt roads, the everyday traces of human industry and travel. Turning Point (1989), for example, shows two figures facing each other in profile on a wintry desert road as a train passes behind them. The man at the very centre of the painting becomes a kind of fulcrum. Everything in the landscape to his left is horizontal, the train perfectly parallel to the horizon, but on his right both the road and train take a dramatic turn, pulling away into the distance.

Beginning in the 1990s, Boyd & Evans also showed an interest in pure landscape devoid of human presence, a concern which developed while in Indonesia and the American Southwest. Parallel to this strand, they also explored interiors and the familial relationships of people within them.

Views also includes photographs Boyd & Evans have taken throughout their career. Photography has become a central position within their practice, allowing the artists to explore many of the same concerns with the nature of viewing, perspective and narrative as in their paintings. As technology has developed to allow the manipulation of photographs in the last decade, and as their relationship to the near-empty desert landscapes of America has deepened, Boyd & Evans’ photography has become more painterly. Draining colour from all but a central element of their compositions, their works heighten the strange luminosity in pools of water, lone buildings or twisted cans rusting in the desert. Throughout their career, Boyd & Evans have traversed the already porous boundary between realism and illusionism.

Views is part of the London 2012 Festival, a spectacular 12-week nationwide celebration running from 21 June until 9 September 2012 bringing together leading artists from across the world with the very best from the UK.