Led by founder and Artistic Director Edward Hall, Propeller returns to the Belgrade’s Main Stage following their highly praised performances of Richard III and The Comedy of Errors, which came to the theatre in February 2011. 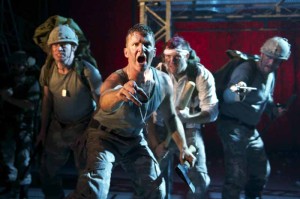 Propeller’s new production of Henry V tells the tale of the greatest British warrior in English folklore. In a time when nationalism is at its most dangerous and exciting and increasing numbers of British servicemen and women are seeing active service, Propeller brings its own unique take on one of Shakespeare’s most famous plays. Henry V marks the beginning of a journey that takes us from the corridors of Westminster to the fields of France in an evening of unforgettable power.

A tragic fairytale, The Winter’s Tale tells the mysterious and extraordinary story of a man consumed by an inexplicable jealousy that destroys his family, his kingdom and himself. Wracked with guilt, Leontes sets off a chain reaction of events that leads to a miraculous climax and the chance of redemption.

Edward Hall is also the Artistic Director of Hampstead Theatre and an artistic associate of the National Theatre, the Old Vic, and The Watermill Theatre, Newbury. Commenting on Propeller he said, “We want to rediscover Shakespeare simply by doing the plays as we believe they should be done: with great clarity, speed and full of as much imagination in the staging as possible.”

Propeller is an all-male Shakespeare company, so just as it was in Shakespeare’s day the action in both Henry V and The Winter’s Tale will be played out by an ensemble cast of all male actors. The company is renowned for mixing a rigorous approach to the text with a modern physical aesthetic and they have been influenced by mask work, animation and both classic and modern film and music from all ages