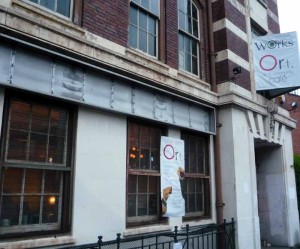 Given that both speakers in last night’s Elected Mayor debate at the Ort Café make a living respectively deploying and debunking rhetoric, it was perhaps inevitable that the audience of around 50 people would come away well entertained but little the wiser about the real costs and benefits of the ‘once-in-a-lifetime’ change that we are asked to vote on next week.

On the ‘Yes’ side, Debra Davis, former Head of Communications at Birmingham City Council, a job that entailed putting the best possible gloss on a badly performing local authority. On the ‘No’ side, Les Reid, Political Correspondent for the Coventry Telegraph, an award-winning journalist, whose stated mission was to dig under the political rhetoric and get to the truth. This task presumably led him into the ‘No’ camp rather than the ‘Undecided’ camp, which suggests that he preferred to stick with the devil he knew rather than wait to be persuaded by less rhetorical arguments.

Herein lies the dilemma for the voters. What we have now is far from perfect. We have lived with it for a long time. We know more or less how it works and what it costs. But central government is offering us a replacement built almost entirely on rhetoric. We are asked to give a blank cheque to people who have never run a city before but who have the audacity and self-confidence to think they can.

Davis was more or less entreating us to take her word for it that as long as we could find the right ‘man’ for the job an elected mayor (EM) would revive the local economy and satisfy all our hopes and dreams for our city. But she offered no supporting evidence from the real world where this had happened. She asked us to look at other cities where EMs have been successful but didn’t name any on this side of the Atlantic.

Government is traditionally risk-averse, never taking big decisions or initiating major constitutional changes without thorough research and long debate. When issues were particularly hot a Royal Commissions would be set up to consider the matter at length. We only have to look at the protracted process of reforming the House of Lords to see how cautious government is when it comes to reforming itself. So why is government so keen to push Birmingham voters into a far-reaching and permanent constitutional change for its local government and on such a flimsy basis?

Neither speaker answered that question, which left the audience to guess the government’s true motivation. Was it the genuine devolution of power from Westminster or the emasculation of local authorities by centralising power in the single hands of an EM? Why was government risking a ‘No’ vote by not telling us what powers the EM will have and how our 120 local councillors, 40 of whom will be elected by us next week, will be affected?

The vagueness of the proposition has turned the referendum into a test of the credibility of central government and those of its supporters who, like Debra Davis, are prepared to speak on its behalf.

A straw poll at the close of the meeting showed a large majority that included myself, in the ‘No’ camp with a handful of ‘Undecideds’.