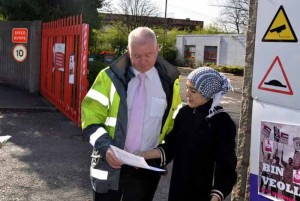 Thirty Palestine rights supporters gathered outside the gates of Veolia’s site in Tyseley on Friday afternoon, 30th March 2012. The rally was to draw attention to Veolia’s commercial activities in supporting Israel’s occupation of East Jerusalem and Palestinian territories.

Flying Palestinian flags, the protesters heard speakers from Stop the War Coalition and Birmingham Trades Union Council. A speaker from Palestine Solidarity Campaign called on Birmingham City Council to urgently review its waste contract with Veolia. Members of the public visiting the tip were handed leaflets by the protesters.

During the rally a letter from West Midlands Palestine Solidarity Campaign was formally handed to a representative of Veolia’s management inviting the company to review its commercial activities in constructing and providing infrastructure for illegal Israeli settlements in the Occupied Palestinian territories.

The letter calls for the company to uphold international law and United Nations resolutions prohibiting the building of Israeli settlements in the Occupied Palestinian territories and for an end to Israel’s occupation.

Veolia Environmental Services is a partner in the construction and development of a light railway system in East Jerusalem connecting illegal settlements with Israel. It also runs a number of bus routes between settlements on the West Bank and Israel. Veolia is contracted by Birmingham City Council to incinerate and recycle the Birmingham’s waste under a 25 year contract which started in 1994.