A Walsall man has personally thanked the postal worker who delivered him the gift of life from 3,000 miles away. 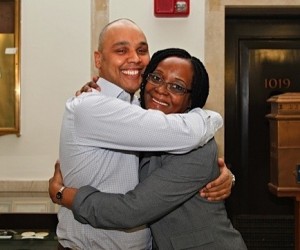 Mark Worrall, aged 40, went to New York last week to meet Audrey Pollard , an employee of the US postal service, who donated bone marrow that saved his life after he was diagnosed with leukaemia.

Mark, the son of former Walsall mayor Richard Worrall, travelled to the city to give an emotional thanks to Audrey and support the US Postal Service’s ‘Delivering the Gift of Life’ campaign to encourage people to join the bone marrow registry.

Though they had spoken through emails and calls over the internet, since the donation in 2004 the trip was the first time the pair had meet face to face and proved to be an emotional moment.

Mark said. “As I prepared to step on the stage to meet with her, all of a sudden the impact of her decision to join the bone marrow register began to dawn on me. Specifically how not only my own life was affected, but hers, too. My family’s life and also that of my girlfriend and her family. So many lives were touched and affected in such a profound way by her courageous decision.”

When Mark, who is of mixed Irish and Caribbean heritage, was told he had chronic myeloid leukaemia he learnt that his best hope of survival was a bone marrow donation. But his chances of finding an exact match were dependent on donors of the same ethnic origin being registered.

Along with his adoptive father, Richard, he began a campaign to get people to sign up. He particularly wanted local people from ethnic minorities to join because they are underrepresented on the register. But in the end the desperately needed gift of life came unexpectedly from 3,000 miles away.

Audrey explained she had been on the international registry for only six months when she was told she was a match for Mark in England . Saying it had not only changed Mark’s life but also her own and their families, she said: “If I got another phone call saying I was a match for someone else I would go through the whole process again without even thinking.”

Thanking Audrey, Mark said: “She is fantastic, she is my saviour. She saved my life.”

Anyone wishing to register as a bone marrow donor can contact the Anthony Nolan Trust on http://www.anthonynolan.org/