Press release from the organisers of The Best of Britain & Ireland exhibition at the NEC, held this week. 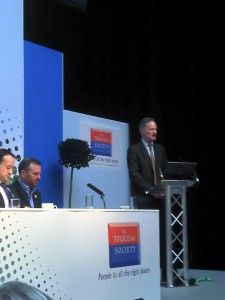 John Penrose MP speaking at BoBI at the NEC

Quality, quality, quality was the over-riding message coming through today, as Expo Management, the organisers of Best of Britain & Ireland, issued their preliminary figures for the two day tourism trade exhibition held at the NEC Birmingham this week.

Best of Britain & Ireland is the showcase trade event of this week’s English Tourism Week, and the largest gathering of tourism professionals to date this year from England, Ireland, Scotland and Wales.

“We are delighted that the first phase of our initial three year investment plan is already beginning to bring in results.  We will now analyse our data and research over the coming weeks and take the results on board as part of our preparations for 2013.

“We are extremely pleased with the initial feedback, and the overwhelming message that we are getting from our exhibitors has been a marked rise in the quality of the attending buyers, and their determination to do real business.”

“These quality buyers were also treated to an equal investment from exhibitors with the large majority going the extra mile with great displays of their product.  It’s heartening that many of our exhibitors report having a very positive two days doing business and we believe that overall our first Best of Britain & Ireland was a great success.  This is reflected by the fact that over 4,300 meetings were arranged through the meeting planner – an average of over 15 per exhibitor.

“The Minister’s Q&A event organised by The Tourism Society and including John Penrose MP, UK Minister for Tourism & Heritage, and Leo Varadkar TD Minister for Transport, Tourism and Sport for the Republic of Ireland along with senior representatives from the major tourism organisations of England, Ireland, Scotland and Wales, was extremely popular and added real gravitas to the event .

“This is just the first year of our initial three year plan to grow Best of Britain & Ireland to the benefit of the tourism industry of the United Kingdom and Ireland for the long term, and already we are beginning to see positive results coming through with many exhibitors already wanting to book space for next year, and in many cases, increase their presence.” concluded Sam Warnock, “I believe that our exhibitors, visitors, and tourism partners have recognised our enthusiasm and determination to grow Best of Britain & Ireland.  Our knowledge of the industry and our on-going commitment to develop the show for our tourism industry has been essential in getting a successful first Best of Britain & Ireland under our belt.”

Expo Management, show organisers have confirmed the dates for 2013 will be Wednesday March 13 and Thursday March 14.  The sales launch will be announced after Easter.