The general manager of a top Solihull hotel is urging the borough against “NEC complacency” and to do more to attract visitors in the run-up to the Olympics. 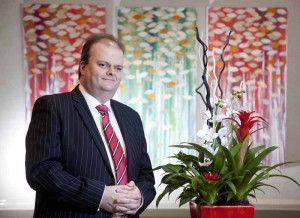 Tony Hill, who runs The St John’s Hotel on Warwick Road, which has extensive conference facilities attracting international delegates, says Solihull relies too heavily on NEC-related tourism and should focus more on singing the praises of the town and surrounding countryside.

“This hotel is a prime example: until the Principal Hayley group took it over three years ago, it was very much about banking cash from big NEC events,” he says. “So there was complacency; hardly any money was spent on the hotel because it knew it could rely on a steady flow of customers from the NEC. But although the NEC attracts about two million visitors a year, the difficult economic climate means we shouldn’t depend upon that: I feel it’s time to start marketing Solihull as a place to come in its own right, especially at weekends and with the Olympics coming up.”

Tony, who took over as general manager of the four-star St John’s last summer, says Solihull has a lot to offer visitors.

“Firstly, it’s incredibly convenient to get here, wherever you are in the country. As well as the motorway network, there’s a great rail service: you can now travel direct from London Marylebone to Solihull on Chiltern Railways in under two hours.

“And when you get here, what a lot there is to see and do. Solihull is renowned as a great place to shop – as well as the only John Lewis in the area, it also has the award-winning Touchwood mall. There are great bars and restaurants, lovely architecture and a friendly atmosphere.

“It’s less than an hour to Bicester retail village, another ten minutes to the centre of Oxford, and it’s not much further to Blenheim. Stratford is just down the road, plus there’s wonderful countryside all around and pretty villages.”

With the Olympics due to bring a surge of visitors to Britain over the summer, Tony says Solihull needs embark on a tourism drive to tempt tourists out of the capital.

“The Olympics will bring a lot more overseas tourists to the UK; many of them will stay for a couple of weeks and will want to see more of the country than London. Solihull is a great base for visitors who want to visit Shakespeare’s birthplace and experience the quintessential English countryside. We have to tap into that market.”

Tony, who has been in the hospitality industry for 30 years, says Solihull business leaders should join force to spearhead a tourism drive.

“I’m relatively new to Solihull, so perhaps I see it with fresh eyes. I do feel we need to do more to market the town and the borough to bring people into the borough.”