Birmingham-based Zeshaan Ali expected his recent trip to Niger to be an “emotionally difficult journey”. He was right. 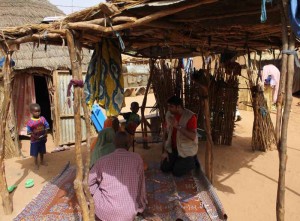 Zeshaan travelled to Niger to see the impact of the severe drought that has left nearly 13 million people facing food shortages. People like baby Oumoukheyrou, who at nine months old weighed just three kilograms – less than half the weight she should be. The little girl was cuddled up to her mother, her limbs almost too tiny to be believed.

“Oumoukheyrou’s hair couldn’t grow properly; she was severely malnourished and needed immediate intervention. The hospital was able to start her on a life-saving protein supplement. But the doctor explained to us that although they will be able to get her back to full health, the food shortage means she is likely to be readmitted sometime in the near future.

“The harsh reality is that Oumoukheyrou is one of the lucky ones because she actually made it to hospital. What about the ones who don’t? How many of them will there be? What can we do now to make a difference?”

“It was amazing to see how Oumoukheyrou’s painful crying stopped as she was being treated. I also met four-year-old Razzaq, who had severe asthma. Because of our support, he has had treatment that has prevented further asthma attacks and he can go to school. And it doesn’t stop there. The funds he receives also support his mother and elder brother. I witnessed first hand the difference this has made, and I saw that Razzaq’s mother is so grateful.”

Zeshaan vividly recalls his visit to Oullam District Hospital, which is getting extra beds ready in anticipation of an influx of malnourished children. Looking at a quiet row of empty beds, he imagined how the overcrowded wards are going to look, the harrowing sight of suffering children as the situation deteriorates.

Evidence of drought was all around.  Zeshaan passed through dry, cracked areas of land where only a year ago there was a free-flowing river. “All you see now is a vast emptiness,” he says. 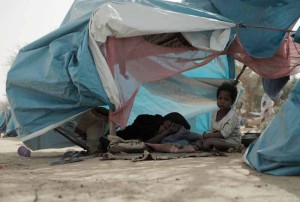 And in the village of Harigana, Zeshaan was confronted with a worrying sign of how serious the situation is becoming – bare, empty crop storage huts which at this time of year should be filled with produce from the harvest.

“There are entire villages surviving on 5% of their normal harvest,” he explains. Harigana’s  village leader is expecting things to deteriorate unless something is done – and quickly.

Islamic Relief is the only Muslim charity working in the field in Niger and is the largest aid organisation in the Tillaberi district, one of the worst affected regions. “Either the international community acts now and mitigates the coming disaster, or it waits until things hit crisis point, which is likely to mean more deaths.”

Zeshaan’s encounter with 17-year-old Ashatau taught him the value of longer-term support from Islamic Relief, and how child sponsorship transforms lives. Ashatau used to live in what he describes as awful conditions, but now she attends school and has learned to sew. She intends to use this new skill for work in the future. Her six other siblings can also attend school, thanks to sponsorship.

Zeshaan came home fired up with a need to talk about what Islamic Relief supporters in the UK can do to help.