A progress report on the saga of the Moseley Road Baths restoration. 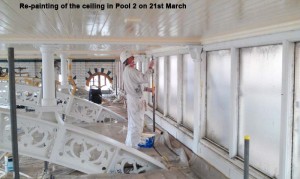 Cabinet Member for Leisure Sport and Culture Martin Mullaney attended a contractors meeting yesterday at Moseley Road Baths and announced, “We are on target to re-open the pool to the public in mid-April.”

The repainting of the interior of Pool 2 will be finished today. Mesh will be installed in front of the ceiling windows as a safety precaution; in case any panes of glass come loose between now and the restoration in 2014.

The scaffolding inside Pool 2 will be completely removed by Wednesday 4th April. On the Thursday and Friday the contractors will then give Pool 2 a clean down.

From Tuesday 10th April, the staff in the baths will start the process of fine cleaning the pool and refilling it. This normally takes about five days.

Moseley Road Baths opened on October 30th 1907 at a cost of £32,924. It is the oldest of only three Grade II Listed swimming baths currently operating in Britain (those at the privately-owned RAC Club in London and The National Sports Centre at Crystal Palace being the other two). Moseley Road is a window on a lifestyle that was common to millions of Britons at the turn of the 19th century.