Terry Wills enjoys the latest production of Spamalot, at the New Alexandra Theatre. 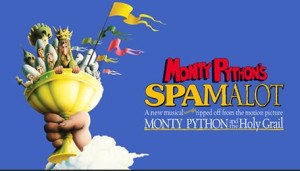 It’s back! Monty Python’s Spamalot , described as ‘The hit musical, lovingly ripped off from Monty Python and the Holy Grail’

It’s a sheer delight that had a first night audience roaring with laughter from curtain up until two hours later, when they’re more than happy to join in the instantly recognisable show stopper ‘Always look on the bright side of life’ together with the whole of the cast. The publicity blurb tells that it’s “Now in its Second Smash Hit Year”. No surprise there and as long as it continues in its current vein it will still be pulling in audiences for many years to come.

The ‘plot’? Briefly it tells the story of the legendary King Arthur and his Knights of the Round Table. They set off in an attempt to find the Holy Grail and along the way encounter problems that the fevered talents of Eric Idle’s lyrics and John Du Prez’s music naturally place in their path.

The scene is set as a team of body collectors roam the streets with a handcart calling out “Bring out your dead”. One of the occupants, finding himself thrown on the cart promptly jumps off, does a jig, and for good measure shouts “I’m not dead.”

Problem solved – a whack on the head from a cudgel and he’s now worthy of his place on the cart.

I couldn’t see any member of the audience sitting around me  not laughing, but if there were any they were most probably those that fail to appreciate the Monty Python sense of humour. Along the way King Arthur and his faithful accomplice, Patsy encounter opposition from who else but our French neighbours. There are many hilarious scenes, none more so than when Arthur (clashing swords with a French opponent) first manages to lop off the arms of his counterpart who defiantly claims “It’s only a flesh wound.”  Arthur lops off both legs and the hapless, armless, Frenchman laughingly says “Let’s call it a draw.”

One never knows what to expect next. A nun dressed in her habit pushing a pram holding her baby before making advances to a passing stranger, the introduction of a huge killer rabbit and two scantily clad dancing girls who looked somewhat out of place in a tale of this nature!

Naturally it has to incorporate a love story. This comes in the shape of the Lady in the Lake, played by the ever young Bonnie Langford. In such a crazy story Bonnie’s appearances are somewhat restricted, so much so that with the curtain down in Act II she laments that she hardly has a part to play compared to some of her fellow artists.

Other principal roles see King Arthur played Steven Pacey (Eastenders), Patsy is Todd Carty – another Eastenders veteran – while the Lady of the Lake enjoys an appreciative rapport with the audience despite her assertion that she’s been given limited appearances.

For anyone who enjoys the off-beat, not to say lunatic, works of Monty Python, but has yet to see it close up, here is the perfect opportunity to judge how it transcends the change from television and film to the stage of a ‘live’ theatre audience.

I enjoyed it, everyone around shared in the applause, and I’ll be very surprised if it fails to attract healthy audiences to the Alex as part of its nationwide tour.

Spamalot is at the New Alexandra Theatre, Birmingham, until 30th March.