Coventry’s Belgrade Theatre has been named the Creative Apprentice Employer of the Year 2012. The National Skills Academy made the ward in recognition of its thriving creative apprenticeship scheme, which currently employs seven apprentices. 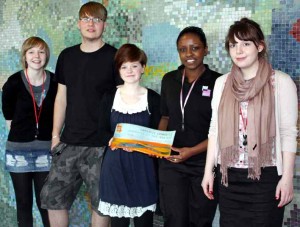 The award was presented at the National Skills Academy’s third Annual Industry Conference, which took place at the Lowry in Salford on the 6 and 7 March and was attended by representatives from the creative and cultural industries and the education sector. The conference saw John Hayes MP, Minister of State for Further Education, Skills and Lifelong Learning, celebrate the significant contribution the creative and cultural industries make to the UK’s economy.

Janthi Mills, General Manager at the Belgrade, said: “We are delighted to have won this award for our creative apprenticeship scheme. By offering hands on training we can ensure we are able to build an appropriate and fit for purpose workforce whilst nurturing the next generation of theatre professionals.

Having apprentices in the building has also been refreshing for our core staff as it enables them to think about their roles within the industry and how they have the power to inspire and enable future generations of arts professionals, which in turn aids the sustainability of the arts sector.”

Offered in conjunction with Stratford-upon-Avon College and Heart of England Training, the Belgrade’s Creative Apprenticeship Scheme was launched in 2011 as the theatre had been receiving an increasing number of applications for work placements.

Since then the scheme has gone from strength to strength and apprentices now make up 15% of the theatre’s workforce. The 11 month posts provide paid, hands-on experience in various areas within the theatre, with the current intake employed in the areas of marketing, customer services, sound, theatre operations, wardrobe, lighting and community arts. In addition to working in their own specialist department, apprentices also meet regularly as a group to peer mentor each other and give an insight into the range of roles available within the industry.

At the end of the course the apprentices will have gained a wealth of knowledge about working in a theatre and a level two qualification in their specified area.

Rosie Mackie, the Belgrade’s Communications Apprentice, said: “The Belgrade Theatre provides so many opportunities for young people and it really deserves to be recognised for its commitment to community and education. This apprenticeship has allowed me to enter into an industry which I thought would be almost impossible to get involved in as it’s so competitive. I love working at the Belgrade.”