The first ever database of sporting statues in the UK has been compiled by academics at the University of Sheffield.

From World Cup winners to F1 racing champions, big-hitters in boxing to golfing greats , the stars of the track and field to kings of the bowling green, more than one hundred statues honour our sporting heroes across the UK.

The comprehensive list – part of a study titled From Pitch To Plinth: The Sporting Statues Project – reveals there are 120 statues depicting specific sporting heroes currently taking pride of place at the sports stadia or in the towns and cities in the UK, with a further 18 planned.

The database, at www.sportingstatues.com , features links to location maps, information on when the statues were unveiled, who sculpted them and the inscriptions on plinths or plaques, as well as images of each statue.

Dr Chris Stride, from the University of Sheffield’s  Institute of Work Psychology, said: “Our sporting statues, their location and choice of subjects  reflect not only the sporting history of the nation, but also the place of sport in today’s society, the variation in the commercial development of different sports, and the kinship felt by fans.”

Almost half of the existing statues, a total of 57, depict footballers or football managers.  Despite the glory and national acclaim that an Olympic gold medal brings, only rowers Steve Redgrave and Matthew Pinsent, ice-skater John Curry and athletes Steve Ovett and Eric Liddell have been honoured with a statue for their achievements. On the other hand, Rugby Union players, with 15 statues and motor-racing drivers or riders, with 18, are becoming increasingly popular statue subjects.

The first life-size statue of a specific UK sportsperson that the research team uncovered was erected by the grave of Reading motorcycle racer Bernard Laurence Hieatt, following a fatal crash in the early 1930s. The first footballer to be portrayed was Swindon Town’s Harold Fleming in 1956. As with the majority of football statues, this is sited at the player’s ‘home’ stadium.  34 sporting heroes can currently be found portrayed away from stadia in their home towns or cities with a further 24 at national or non-club-specific sporting venues.

“Only a handful of statues pre-date the 1980s, and over two-thirds have been unveiled since 2000,” added Dr Stride. “The reasons for this rapid and recent development are varied. Within football, many statues erected by clubs at their stadia can be seen as branding tools, generating nostalgia in existing fans, offering visual branding that enhances and gentrifies the stadium environment, as well as providing a sense of authenticity and location in an increasingly commercialised and globalised sport. 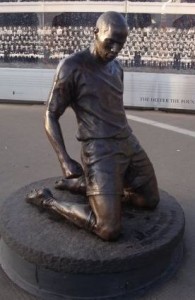 “Arsenal FC actually employed a brand consultancy to design the recently unveiled monuments to Henry, Adams and Chapman at the Emirates Stadium. Fans are increasingly organising statue projects too, motivated by a desire to display their history at relatively characterless new stadia.

He added: “Statues erected in the centres of towns and cities may equally be motivated by marketing concerns – specifically the need for towns and cities that have suffered industrial decline to project a new identity. Their development is aided by the recent boom in, and funding for public art, and a parallel decline in public approval of traditional civic statue subjects such as politicians or churchmen and rise in the celebrity status and visibility of sports stars.

“In sports with a greater element of danger, such as boxing and motorcycle-racing, statues are more typically memorials for deceased heroes, many of whom were killed whilst pursuing their sporting dreams. Such monuments are organised and funded by fans, illustrating the strong sense of community shared by followers of these sports.”