The Belgrade Theatre’s productions of Stars in the Morning Sky and We Love You City have been granted the Inspire mark by the London 2012 Inspire programme, which recognises innovative and exceptional projects that are directly inspired by the 2012 Olympic and Paralympic Games. 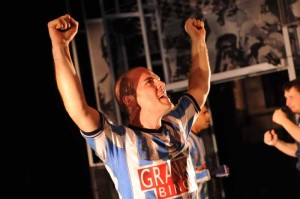 Richard Kidd in We Love You City - credit Robert Day

Part of the London 2012 Cultural Olympiad, the Inspire programme is run by the London Organising Committee of the Olympic Games and Paralympic Games. Stars in the Morning Sky and We Love You City are two of just 1,400 projects in the UK that have been awarded the Inspire mark. 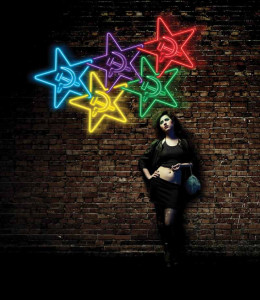 Running in the Belgrade’s B2 auditorium from Sat 17 Mar to Sat 7 Apr, Stars in the Morning Sky is Chris Hannan’s new adaptation of Alexander Galin’s Moscow 1980 Olympics drama which tells the story of a group of potential troublemakers and undesirable characters who find themselves banned from the streets of Moscow during the 1980 Olympic Games.

In a bid to show the world a cleaned-up version of life in the Soviet Union, the authorities have cleared the streets of Moscow of any potential troublemakers and undesirable characters and sent them to a disused mental hospital on the edge of the city. On one unforgettable night, there is both brutality and unexpected romance, as the characters discover what is precious to them – and cling to it for dear life. The play will be directed by the Belgrade’s Artistic Director, Hamish Glen.

Following a hugely successful run last year, We Love You City, returns to Coventry’s Belgrade Theatre from Tues 8 to Sat 26 May, to celebrate the 25th anniversary of Coventry City FC winning the FA Cup and the arrival of the London 2012 Olympic Football Tournament, much of which will be hosted in Coventry.

A co-production with Talking Birds theatre company, the play sees eleven players take centre stage to recreate the events of that legendary match and tell the funny, edgy, moving, and sometimes farcical stories that were playing out in Coventry during those nail-biting 90 minutes – plus a bit of extra time.

Hamish Glen said: “In addition to showcasing the best in athletic ability, the Olympic Games are an opportunity for the UK to show what it has to offer in terms of culture and the arts. As the host of Olympic football matches and an official Live Site venue, Coventry is already playing a pivotal part in the London 2012 Olympic Games. We’re extremely proud that our support of the Games has been officially recognised by awarding We Love You City and Stars in the Morning Sky with the official Inspire mark.”

Tickets for We Love You City and Stars in the Morning Sky are available now from the box office on 024 7655 3055 or via www.belgrade.co.uk where cheaper tickets are available.