Since June 2011 Place Prospectors, a non-profit community interest company, has been working creatively with Stirchley residents, organisations and businesses in their Stirchley Prospects project, to stake claims, find hidden gems and create prospects for its future. The Stirchley Prospects project is interested in what is of value to people, what is unique about the area and what will be beneficial in the long term for regeneration that is badly needed.

The pieces feature imagery symbolising the area’s former industries and prosperity. Place Prospectors wish to add something beautiful to the environment, an area that was once home to many successful manufacturing businesses and a prosperous High Street. 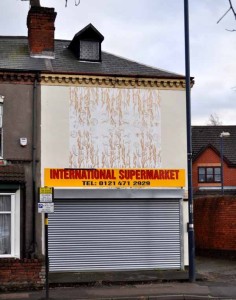 The first piece, located above the International Supermarket (previously Westprint and Glen’s Café) references the local willow beds on which locals earned a living, bees to represent the resident’s industrious nature and the beautiful Stirchley clock which hangs in Stirchley Library. The piece also shows pigs, an abiding memory, kept by locals for the Co-operative Supermarket who has had a presence in Stirchley for many years, and a crucial ingredient in Jewells award-winning pork pies, popular in the 1940s. 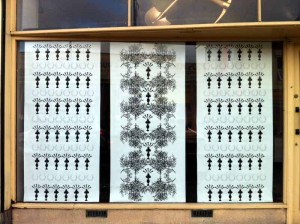 Located in the window of Stirchley Prospects, Place Prospectors headquarters on Pershore Road, another piece references Cox Wilcox – local lamp makers and Guest, Keen and Nettlefolds, famous manufacturers of nuts, bolts, and screws. The piece also features cocoa plants in reference to the Cadbury’s factory nearby as well as horseshoes, a symbol of good luck for the future of the area.

Another piece, yet to be installed shows the older factors in Stirchley’s prosperity, the millstones of nearby Hazelwell Mill and the bridging of the River Rea.

The pieces will be located along the Pershore Road until April 2012.

A series of events organised by Place Prospectors celebrating Stirchley will take place over the next months: Stirchley Street Railway Station will be reclaimed from what is now known as Bournville Station, a memorial walk will take place to commemorate Hazelwell Lane, soon to be lost due to the impending Tesco development on the site, and a series of workshops will discuss the future of Stirchley Park located at the back of the Co-operative Supermarket.

For more information go to www.prospectors.org.uk