Stirchley, south Birmingham, is a primarily residential area with a declining shopping street. The future of the area will be impacted upon in the next few years by a number of changes to the built environment brought about by a major commercial development. 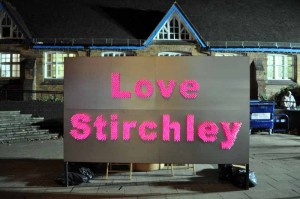 Since June 2011 Place Prospectors, a non-profit community interest company, has been working creatively with Stirchley residents, organisations and businesses in their Stirchley Prospects project, to stake claims, find hidden gems and create prospects for its future. The Stirchley Prospects project is interested in what is of value to people, what is unique about the area and what will be beneficial in the long term for regeneration that is badly needed.

Jayne Murray and Emma Larkinson of Place Prospectors say: “Stirchley has very distinct qualities, architecturally, topographically, socially and economically.  We believe the creative process can provide new ways of valuing Stirchley’s character and contributing ideas to shape and deliver a better place for the future – particularly when faced with significant changes locally. Understanding the times when Stirchley has flourished can help inform what’s needed for it’s future.”

For 2012, exciting and informative events and workshops are planned, as well as the continued publication of the Stirchley Knows zine celebrating the past and present and the uniqueness of the area. The project’s headquarters on the High Street will continue to welcome people who want to take part in these initiatives and bring their local expertise. Place Prospectors aim for their work to inform the long-term development of the area by working in partnership with the local authority and those who have interests in the area.

3 March 2012 – Hazelwell Lane In Memoriam– Soon to be lost due to the impending Tesco development on the site, a series of workshops held on Thursday 9 and Wednesdays 22 & 29 February will commemorate the historic street for future generations. The project will culminate in a walk to celebrate the lane’s life on 3 March 2012.

January 2012 – Prosperity – Three artworks on buildings at intervals along Pershore Road in Stirchley with imagery symbolising Stirchley’s prosperity. The intention is to add something beautiful to the degraded environment. The pieces reference the former industries of the area including Guest, Keen and Nettlefolds, famous manufacturers of nuts, bolts, and screws, Cox Wilcox – lamp manufacturers, and natural phenomena such as willow beds. It will also reference the keeping of pigs in the area, particularly for the Co-operative Supermarket who has had a presence in Stirchley for many years, and Jewells award-winning pork pies which were popular in the 1940s.

February 2012 – Stirchley Street Railway Station – Art will be located at Bournville Railway Station, known as Stirchley Street Station when first built. The piece aims to reassert Stirchley’s claim to the station, situated in Stirchley yet having taken the name of the famous home of Cadbury’s for over a hundred years. The art, which will be seen by thousands of commuters will highlight the area.

Sundays 15 January, 29 January and 12 February 11am-1pm. Meet at the old pavilion. Bring something to sit on, shelter will be provided. Come rain or shine.