The Coventry International Prize for Peace and Reconciliation 2011 has been awarded to Birmingham-based independent peace-building organisation Responding to Conflict (RTC) at a ceremony hosted by co-sponsors Coventry University. RTC was the only UK-based organisation to make this year’s shortlist. 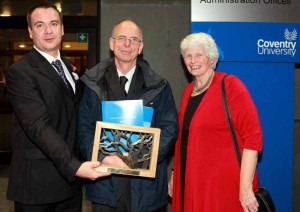 The peace prize is an annual accolade which honours initiatives, organisations, individuals or projects that have made a commendable contribution in the areas of peace, reconciliation and campaigns for social and environmental wellbeing. It aims to highlight those whose work acts as an inspiration and a model for others, and is presented in partnership by the Diocese of Coventry, Coventry Cathedral, the City of Coventry (Office of the Lord Mayor), and Coventry University.

Professor Alan Hunter, Director of Coventry University’s Centre for Peace and Reconciliation Studies, said: “This inspiring choice comes at a time of violence and protest around the world. It is therefore critical to identify and train effective peace-builders, who can return to areas of conflict and place themselves in positions of influence in their own communities. Responding to Conflict does this extremely well, and is therefore a worthy winner.” 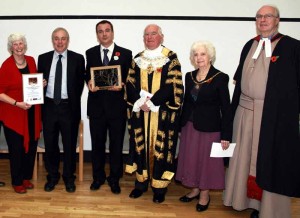 RTC has been working since 1991 to establish itself as a leader in the field of conflict transformation; enhancing the knowledge and strengthening the skills of those living with violent conflict, to transform violence and build peaceful futures. It is a small organisation, driven by dedicated staff and the commitment of a large network of stakeholders across many countries, working together to promote peace and reconciliation.

Responding to Conflicts’ Chair of Trustees, Cliff Allum sees the award as recognition of the energy, optimism and bravery of the people associated with RTC over the years. He believes the organisation has never been afraid to take up the challenges of addressing conflict, even in areas where many could not see that change was possible.

RTC has trained practitioners from more than 70 countries and its handbook ‘Working with Conflict: Skills and Strategies for Action’ is acknowledged as a key resource throughout the world and been translated into eight languages.

Responding to Conflict’s Programme Director, Simon Weatherbed said: “It is a great honour to receive this Prize. Building and sustaining peace is not an easy task and requires long-term commitment. Many of the people we have worked with have continued to transform violent conflicts and countless people’s lives, and in honour of these remarkable people and all who have worked with or supported Responding to Conflict, I am proud to accept this prestigious award.” 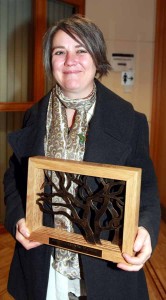 Rachel Sutton – Artist who designed and made the prize, also Coventry University Graduate

Not only did Coventry University host the ceremony this year, but the award itself was designed by a former student. Coventry artist Rachel Sutton graduated from Coventry School of Art and Design in 2010 with a first class honours degree in Applied Arts. Her work aims to provoke thought and discussion about social and political issues, so when the Peace Prize was re-launched in 2010 by a new partnership to commemorate the 70th anniversary of the Blitz, Rachel was the obvious choice to design the new award.