The London Jazz Festival may well be fully throbbing this weekend, but across the Atlantic in Detroit, there’s a gargantuan (and completely free-admission) alternative. All we have to do is pay the airfare, says Martin Longley… 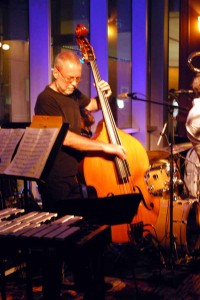 There are few jazz festivals around the globe where it’s possible to experience all four seasons in a single weekend. The Michigan locals will attest to the complete unpredictability of Detroit’s weather conditions, but this massive weekender was prey to all of the possible extremes.

It began on Friday with severe heat and humidity, straight outta Bangkok, passed through a deep chill, and concluded with a pleasantly overcast drizzle. Oh yes, and right in the middle, a Saturday night micro-hurricane succeeded in shutting down all of its outdoor stages for the first time in the festival’s 32-year history.

Some devoted experimental-scene specialists might remain lukewarm when perusing the Detroitfest line-up, but this programme offers the ultimate in mainline jazz impressiveness, appealing to the tastes of folks who frequent joints like Ronnie Scott’s.

The fest takes over two prime locations around the General Motors tower, connected by Woodward Avenue, which is lined with vendors. There are four main music stages, as well as several specialist mini-platforms (panels, interviews, kiddie workshops).

The opening night presented a particularly powerful pair of concerts, both of them conceptual in nature. One project was making its debut, presumably intent on a future festival existence, the other was benefiting from some heavy European road-testing.

Jeff ‘Tain’ Watts was this year’s ‘artist in residence’ (an ongoing festival tradition), and his Drum Club immediately made his most ambitious statement of the weekend’s several platforms for his various combos. Watts was joined by fellow percussionists Horacio ‘El Negro’ Hernandez, Tony Allen, Joe Locke and Susie Ibarra. The latter sometimes moved from kit to Indonesian gongs, forming an alliance with vibesman Locke.

The music sounded naturally integrated, negating advance suspicions of a confusing stylistic quagmire. The percussive panorama was sufficiently wide to maintain consistent interest, even in the face of drum battery.

The other thematic show was Sing The Truth!, an excuse for Angelique Kidjo, Dianne Reeves and Lizz Wright to voice any damned protest song they wanted. Having already caught this team in July (at the Gent Jazz Festival), I can report that the show (and show is a suitably grand word) had further evolved into a celebration of the threesome’s amazing rapport. The entire gig was spent wondering which singer was going to transcend above the heavens next, all the while remaining the closest of competitive hand-holding friends as they gradually took the Afro-soul-gospel-jazz higher and higher.

One of the joys of this festival (particularly for the out-of-towner) is its sub-theme of indigenous Detroit jazz. After having witnessed the saxophonist Rafael Ricky Statin soloing fiercely with the Drum Club, it was further enlightening to catch him as a bandleader on the Monday. He was my local ‘discovery’ of the weekend, although there was sturdy competition from the J.C. Heard Tribute Band and the closing extravaganza delivered by the Detroit Jazz Festival Orchestra. This involved contrasting spotlights from bassman Christian McBride (chiefly as composer) and the veteran singer (and charismatic entertainer) Ernie Andrews.

There’s virtually no room in this review to discuss the hot sets by Regina Carter’s Reverse Thread (exquisite Afro-weaving), the Karriem Riggens Ensemble (Detroit drummer with guesting rapper Common), and Vinicius Cantuária (the coolest of the hot ones).

Some of the weekend’s greatest music rose up out of adversity. In the early evening of Saturday, a sudden thunderstorm descended on the city, with high winds and torrential downpour effectively closing down the outdoor stages. Just following the first of two onslaughts, the Sun Ra Arkestra were the best group in the cosmos to deal with such a situation. They performed in a completely acoustic state on the massive Amphitheatre Stage, concentrating on their street-perambulating manifestation. Even though lacking electric guitars, marimba/vibes and full drumkit, they delivered a defiant set of ritual Afro-jazz.

For a few hours, the organisers were hoping to persevere, but a second storm failed to swerve and the only way to salvage the situation was to move inside the bar of the Marriott Hotel, which was acting as a jam session hub for the weekend. The greatest disappointment was that we weren’t going to see Mandrill playing. However, word of mouth, and quite possibly text-of-Tweet, went out that three bands would be colonising the bar area.

An hour later, Jason Moran had changed his mind, whether due to technical shortcomings, $$$$ or merely staring into the rabid eyes of the rapidly gathering throng. The enforced imprisonment created a hot-wired sense of “let’s do the show right here”, and who could have delivered more potently than the Dave Holland Octet, whose usual level is always, at the very least, vaulting? The energies of the caged crowd and those of this truly improvising combo meshed in an astounding show of highly-arranged thrust-jazz, at once holding onto its organisational qualities, but careening off into a desperate zone where soloing became an immensely competitive act, ravenously feeding off the shrieking and whooping crowd. This was Holland and company caught at their highest level, and it was jazz in its primal state.

Stoking this same fire in a different way, the Deacon Jones Blues Revue also converted to intimacy. The Chicagoan organist and his singer Sherry Pruitt were well capable of carrying the show, but a guest appearance by the 11-year-old lead guitarist Ray Goren held an incredibly disconcerting quality (he looked even younger), as he flashed out incendiary licks that sounded like they should be created by a grizzled old soldier of the blues.

The lightning was flashing inside and out…