Blues and rock fans will be happy to be in Bilston this week. 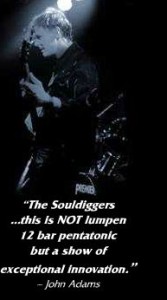 On Wednesday the Robin plays host to one of the most critically-acclaimed new blues acts of recent years.  Geoff Achison spend his formative years in Australia before heading first to the USA and then London, where he gained a reputation through his live work and soulful guitar playing. With his band the Souldiggers he has subsequently toured around the world. Tickets £12.50.

Thursday sees the return of tribute act Magic – A Kind of Queen. Tickets £12.50.

Friday heralds the arrival of one of the Robin’s perennial favourites. Originally formed as a side project while their members got on with more lucrative but less enjoyable jobs, the Blues Band have spent decades as arguably Britain’s most consistent blues attraction.  As ever they’re fronted by the evergreen Paul Jones, a man who makes Cliff Richard look wizened, with Dave Kelly and Tom McGuinness amongst the line-up. Tickets £17.

On Sunday Touchstone play the Robin. More rock prog than prog rock, they’ve been described as Yes meets Van Halen and are touring to promote their latest album The City Sleeps. Support is from ex-Mostly  Autumn singer Heather Findlay. Tickets £12.

For more details call the Robin on 01902-401211 or visit www.therobin.co.uk Ticket prices stated are in advance and may be higher on the night.