Members of Selly Oak-based musical theatre society, The Arcadians, are celebrating the group’s 40th anniversary this month as they present the musical Godspell at the Crescent Theatre in Birmingham from 4-8 Oct 2011, 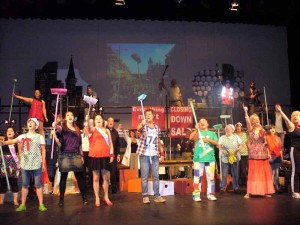 Godspell (also celebrating 40 years since it opened on Broadway) is a contemporary interpretation of the Gospel according to Matthew, to which the Arcadians have given a local twist, setting it against a Birmingham backdrop. The musical opens with John the Baptist calling a disparate group of young brummies from their workday lives to follow and learn from Jesus.  They form a roving acting troupe that enacts the parables through song and dance, comedy and mime, building up their community as they go.  This is a celebration of community, tolerance and love in difficult times which is relevant for all (young or old, religious or otherwise); definitely not just for those with an interest in religion.

The score by Stephen Schwartz (more recently known for ‘Wicked’) contains many inspiring numbers, including the hit songs ‘Day by Day’ and ‘By My Side’.  Particularly poignant is the song ‘Beautiful City’, which depicts the rebuilding of a city brick by brick. 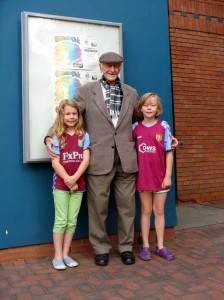 The youngest members who will be performing in Godspell are 8-year-olds Amy Clabon and Fiona Mellor, who both go to Bournville Junior School

Playing the role of Jesus is Simon Burgess, from Northfield, who runs his own training and development company.  Simon has been performing with the Arcadians since 2002, with his favourite roles including Kipps in ‘Half a Sixpence’ and Frank Butler in ‘Annie Get Your Gun’.  Simon is looking forward to the challenges of the role: “Being on stage for the whole production is something new to me so there has to be a lot of constant awareness and effort put into acting the part of Jesus.” 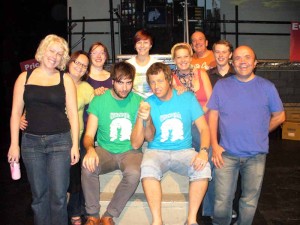 Playing John the Baptist/Judas is 25-year-old Luke Hopson, a drama teacher at Castle Vale Performing Arts School.  Luke is new to the Arcadians, but has performed with other local theatre companies and also sings in a band called ‘Pan & The Poets’.  He is looking forward to playing Judas, but says that the challenge is going to be in avoiding playing him as the stereotypical villain: “I want to make him more complex; a man that adores Jesus but is forced to betray him and is confused and misunderstood.”

The Tuesday 4 October performance will include Sign Language Interpretation by an Interpreter for the Deaf.

Formed in 1971 as a result of a merger between the Harborne Operatic and Dramatic Society and the Arcadian Operatic and Dramatic Society, ‘The New Arcadians’ (now just ‘The Arcadians’), who then rehearsed at Harborne Hill School, put on their first production of Finian’s Rainbow at The Great Hall, University of Aston in November 1971.  Since then they have notched up a total of 71 productions at various venues, with the Crescent being their performance home since October 2004.

Further information about the Arcadians can be found on www.arcadians.net