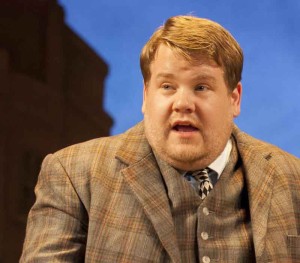 There was a moment as we were all scrabbling for the bar during the interval at this madcap comedy when the lady next to me flipped on her phone and shouted: ‘You just have to see this. It’s soooo funny.’

Well, yes, despite her shouting down her mobile as well as my earhole as we snaked through the never ending corridors of this cavernous theatre, it is, well, sooooooo funny.

One Man, Two Guvnors gleefully pays tribute to a comic Italian masterpiece from the 18th century called The Servant of Two Masters about a tricksy shyster who is hired by two bosses and manages to screw everything up to great laughs from the willing audience.

James Corden, the chubby guy who gave us Gavin and Stacey off the telly, gets the role right, a basketball shaped comedian who runs through his manic role with panache and lets the paying crowd in on the jokes with his countless asides.

The production itself is a major tribute not only to the original playwright Carol Goldini but to varied other sources: The Marx Brothers, commedia dell’arte, Mr Bean, Feydeau and all those Ealing comedies that saw Sid James and Barbara Windsor ooooooo and ahhhh around the screen.

Writer Richard Bean even has the cheek (ahem) to locate the play- set in the early sixties- in Brighton to remind Britain about its inglorious legacy of smut-lite seaside humour. It’s a play that is more subtle than it looks- more knowledgeable than it makes out.

As TheBirminghamPress.com press tickets ensured I was in the cheap seats way in the gods, I lost some of the fast dialogue as Corden and crew played mainly to the stalls. The acoustics up in the Grand Circle at The Alex are terrible.

But the physical comedy, knowing humour and deft directing by Nicholas Hytner (with bigtime West End and operatic credits) creates not only a success but a well produced tribute to what makes us laugh.