Children’s TV favourites, Numberjacks, are leaving the sofa for the very first time and making their way to Coventry’s Belgrade Theatre for the first ever live Numberjacks show which will be playing on the Main Stage from Tues 18 to Sat 22 October. 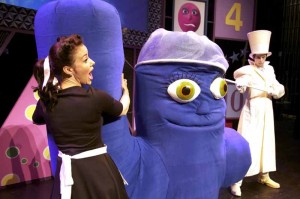 This live adventure will see the ten single-digit superheroes solve problems as they go, with the help of their young fans while watching out for the dastardly Numbertaker and Spooky Spoon, who do all they can to disrupt proceedings.

Running successfully on BBC and CBeebies for five years, Numberjacks acts as a building block for young children and helps them to learn about numbers, shapes and sizes in a fun way. Now, one of the original creators of Numberjacks, Chris Ellis, has created a stage show to further the ethos of learning developed within the TV series.

Chris Ellis said: “We know that Numberjacks fans love to engage with the characters and the live show will give them the opportunity to do just that. Expect quite a bit of ‘pantomime’ and audience participation, together with the usual adventure, excitement and learning.”

Numberjacks is one of the highest rated children’s television shows and has been the winner of the Royal Television Society Award for Best Pre-school TV series three years in a row. In addition the show has been rated the ‘Most Educationally Beneficial’ children’s brand in a survey of mumsnet.com users.

The stage version of Numberjacks is recommended for children aged between three and seven.