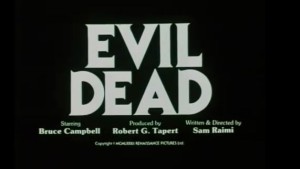 Light House will hold a special screening of Sam Raimi’s cult horror classic The Evil Dead this Halloween, digitally remastered and back on the big screen in all its gory detail. The Halloween screening will take place on Monday 31 October, 8.30pm and tickets cost £6.80 / £5.40 conc. with every ticket holder treated to a complimentary Halloween cocktail. Over 18s only. To book tickets contact Light House Box Office on 01902 716055 or visit www.light-house.co.uk.

Five friends in a cabin in the woods find unspeakable evil lurking in the forest; the Necronomicon book and taped translation of the text. The tape is played, the evil is released and the teens are possessed. It is up to the last teen to survive the night and battle the evil dead. The film originally premiered in Michigan on October 15, 1981 and was considered extremely controversial for its graphic terror, violence, and gore, being turned down at first by almost all US film distributors. After being released officially in 1983, the film gained a cult following, went on to spawn two sequels and looks set to be remade in 2012.

Film fans and horror enthusiasts can relive the enduring appeal of The Evil Dead on the big screen in digital high definition this Halloween at Light House on Monday 31 October, 8.30pm.

Tickets cost £6.80 / £5.40 conc. with every ticket holder treated to a complimentary Halloween cocktail.

For more info or to book tickets contact Light House Box Office on 01902 716055 or visit www.light-house.co.uk.