Research has shown that regular exercise can reduce the risk of developing the condition by up to a third; however a recent YouGov poll commissioned by Bupa and Alzheimer’s Society has shown that to most people in the West Midlands, this is not common knowledge.

Of those surveyed in the West Midlands, only nine per cent recognised that taking regular exercise is one of the best ways to reduce their risk. 25 per cent believed that there was nothing at all that could be done to prevent dementia.

Nearly 1,000 people will be donning their running shoes in support of Alzheimer’s Society on Sunday 23 October, as they take part in the Bupa Great Birmingham Run.

Alzheimer’s Society is Bupa’s charity partner for the Great Runs Series. They have been working together for the last three years to promote the benefits of a healthy lifestyle in reducing a person’s risk of developing dementia. 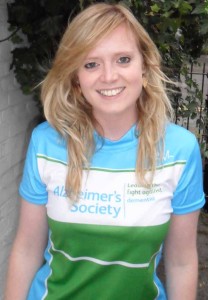 Lichfield born Emma Prince, 25, who works as a press officer for Alzheimer’s Society and will be running the Bupa Great Birmingham Run said: ‘Since working at Alzheimer’s Society I’ve come to understand just how much I can do to reduce my risk of developing dementia. I’m always telling my friends and family the importance of exercise and healthy eating in making sure they are doing all they can to prevent the condition. I’m trying to set a good example by signing up for my first half marathon, as well as helping to raise vital funds to help towards finding a cure.’

Dr Graham Stokes, Bupa’s Director of Dementia Care said: ‘Supporting the Alzheimer’s Society in the Bupa Great Birmingham Run means you can get fit, help reduce your risk of dementia and raise money for a very worthwhile cause. As the UK’s leading provider of dementia care, we’re committed to helping people with the condition to live well and we understand how important it is to work with Alzheimer’s Society to support people with dementia today and find a cure for tomorrow’.