Sandwell Arts Trust have announced that The Public has been successful in securing a £100,000 Lottery award from Arts Council England. 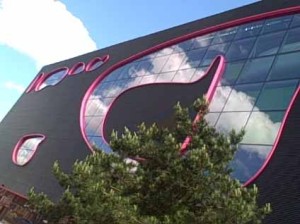 The Public celebrated its second birthday this August and has seen over 330,000 visitors get involved in the arts centre’s exhibitions and events since opening in August 2009.

The £100,000 of funding will be used by The Public to deliver its visual arts programme over the next six months and build on its success of embracing the talents of both local and regional emerging artists as well as established artists. The money will also be used to support a programme of digital and interactive art activity taking place in The Public.

Linda Saunders, Managing Director of The Public said: “We are thrilled to receive this funding from the Arts Council and pleased they are committed to supporting our artistic programme. We are looking forward to continuing to nurture and support the talents of new and young artists, showcasing their work alongside well recognised and established artists – using the arts to contribute to the exciting regeneration plans already in place for West Bromwich.

The work is designed to appeal to The Public’s growing local and family audience and will include workshops, school activities and community events centring around exhibitions on two themes.”

The West Bromwich Arts centre will be rolling out its Autumn and Spring programme with two exciting exhibitions –The Art of Noise and The Art of Architecture. The Art of Noise show launching, 21 October will explore the relationship between artists, sound, music and noise. There will be new work by international artists Jony Easterby and Josh Nimoy alongside commissions from highly regarded regional artists Steve Chamberlain and Steve Gerrard.

The ‘Art of Architecture’ launching in February 2012 will look at the relationship between artists’ and physical spaces. The exhibition will include the work of Interior Design and as well as the return to West Bromwich of Will Alsop, the original architect of the building.

Ros Robins, West Midlands Director with Arts Council England, said: “We have awarded Sandwell Arts Trust £100,000 through our Lottery funded Grants for the arts programme.  This money will support a programme of digital and interactive arts activity taking place in The Public.”