On Friday 21 October, Patrick Monahan, the winner of hit ITV show, ‘Show Me The Funny’, will be bringing his brand new stand up show ‘Hug Me I Feel Good’ to The Public, in what promises to be a night of rip roaring entertainment. 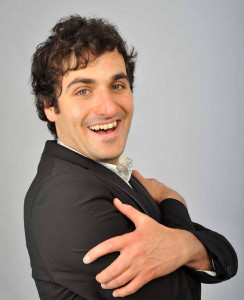 After wowing a panel of celebrity judges over the course of the seven part reality TV programme this summer, the charismatic comic gained most votes in the live final at the Hammersmith Apollo in London at the end of August, winning a staggering 100,000 pounds, nationwide tour and DVD deal.

Listed as one of The Sun’s top 10 comedians of 2010, the winner of the first series of ITV’s ‘Take the Mike’ and comedy festival regular, is set to leave the Black Country arts centre in stitches.

Having been brought up in Middlesbrough by his Iranian mother and Irish father, the talented anecdotal comic has many hilarious and engaging stories about his rich cultural heritage.  Relying heavily on audience interaction and animated story-telling, Monahan’s humour draws on his own experiences and multi cultural upbringing in a warming and intimate manner.

Suitable for over 12s.

Linda Saunders, Managing Director of The Public said, “Patrick Monahan has been a highly regarded comic on the comedy circuit for a number of years so we are very much looking forward to him coming to The Public.  There’s been a great deal of buzz surrounding the event since Patrick’s excellent performances on ‘Show Me The Funny’, so we’re anticipating an excellent evening of entertainment.”

Patrick Monahan will be performing at The Public on Friday 21 October at 8.30pm.  Tickets are £12 (£10 concessions) and are available online from www.thepublic.com or by calling The Public Box Office on 0121 533 7161.