The six best entries in a competition organised by the Royal Institute of British Architects and the Department of Energy and Climate Change to redesign the electricity pylon have just been announced. The pylons have been given the euphonious names, ‘Silhouette’, ‘Y-Pylon’, ‘Plexus’, ‘T-Pylon’, ‘Flower Tower’ and ‘Totem’. 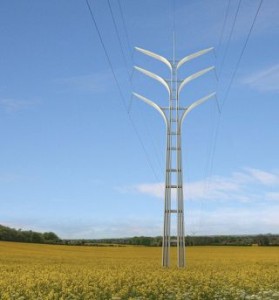 It is surely no coincidence that ideas for making pylons more beautiful are being developed at the same time as many rural communities are opposing wind farms and the pylons that are needed to carry the power to the towns and cities. Travellers to west Wales along the A458 cannot fail to notice the many ‘NO WIND FARMS – NO PYLONS’ posters around Welshpool and in the beautiful Caereinion valley.

The design of pylons has not changed for many decades and they are such an established part of the rural landscape that they are virtually invisible. When they began their long march across the countryside there was little organised resistance to them. The National Grid was a public body and had a free hand because of the enormous economic benefits promised by universal electricity, a popular, clean and modern form of energy. It seems to have been taken for granted by the public that electricity had to be brought from power stations near to the coalfields or in remote locations because of the perceived danger of nuclear radiation in the case of atomic reactors. But instead of burying the cables underground the government approved the cheapest option of stringing the high voltage cables between high towers. 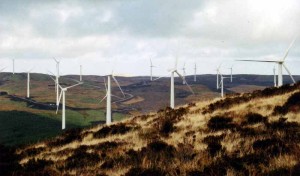 The job of the National Grid, according to its website, is to ensure that electricity generated in power stations and from renewable sources is transmitted to the distribution networks for onward supply to our homes, businesses, schools and hospitals and as such, they have an important role to play in connecting the unprecedented amount of new power generation that is planned over the next decade. It asserts that this is needed to replace existing power stations that are due to close and to achieve the government’s 2020 targets for the reduction of CO2. 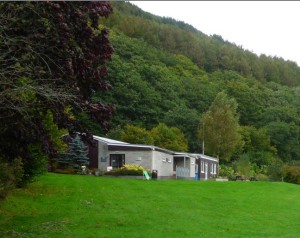 Once again overhead transmission on pylons are cited as the only option even although the National Grid puts gas pipelines underground and could perhaps lay them both together in the same ducts or trenches. The oil companies take great pride in their ability to reinstate land disturbed by their pipelines to its original state.

Mid-Wales is the government’s strategic location for on-shore wind farms, but Mid-Wales does not have a high-voltage network. So the National Grid propose to build substations at Cefn Coch and Abermule that will collect electricity from the wind farms and then send it along high voltage cables on new pylons to the existing line of pylons that run parallel to and north east of the A5 between Shrewsbury and Oswestry. 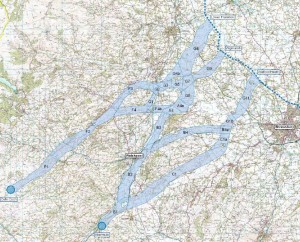 Those of us who are familiar with the Welsh countryside west of Shrewsbury know how lines of pylons will affect it. The National Grid’s proposals map, that can be seen on its website, shows two ‘route corridors’ flowing north east from the proposed substations and splitting into five corridors as they approach the existing power line at Bomere Heath, Walford Heath, Wigmarsh and Lower Frankton.

Supporters of wind farms are thus faced with an unforeseen and unpalatable consequence of renewable energy policy. Whilst rural communities may come to accept wind farms as a lesser of two evils, especially if they have a direct share in the benefits, even their most enthusiastic supporters must have qualms about a new generation of power lines and pylons being strung across a landscape where none has been before.

Whether a funky new pylon design will help sweeten the pill for people who have to live with them remains to be seen. If local protesters prove impossible for government to resist and more expensive solutions are necessary the cost will inevitably be added to all of our electricity bills. 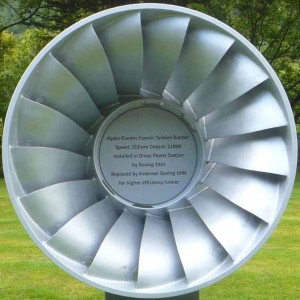 There are alternatives; we could reduce our overall consumption of electricity. After all, we have long had enough for our basic needs. Most of the extra that society wants is likely to be wasted or frittered away on consumer gadgets. By using less we will not only spend less but we can avoid the unpleasant consequences of demanding more. We could also generate more electricity where it is needed – in our towns and cities – as advocated by the West Midlands New Economics Group in its report Sustainable Housing in Small Heath published in 2004. The Feed-in Tariff is a good start but solar panels need to be seen on every roof in Birmingham if the countryside is to avoid the pylon menace. 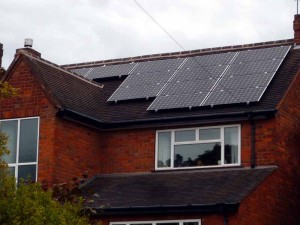