The search is on to find over 300 Coventry Ambassadors to help welcome visitors coming to Coventry for the London 2012 Olympic Games. 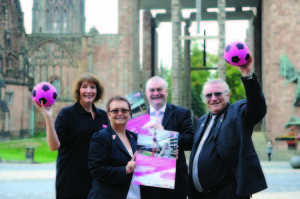 Three hundred volunteers are needed to act as ‘Coventry Ambassadors’ during the London 2012 Games and be responsible for welcoming the world to Coventry when thousands of visitors arrive in July and August 2012.

Coventry Ambassadors will be the first port of call for anyone needing assistance and information about the London2012 Olympic Football competition or other London 2012 related events occurring across the city.

Coventry Ambassadors will play a crucial role in ensuring that everyone who comes to Coventry during the London 2012 Games has a spectacular experience, providing assistance to visitors at key locations across the city and up to, but not inside, the City of Coventry Stadium.

Coventry is only one of six UK-wide venues to host the London 2012 Olympic Football tournament and this will provide a once in a lifetime opportunity for people over 18 years old who live; work; study or volunteer in Coventry, to join in and be part of the biggest sporting event in the world.

People can apply from Tuesday 4 October. Details about the Coventry Ambassador roles, criteria and how to apply are available on www.coventry.gov.uk/coventryambassadors

The task of leading the recruitment, training, development and management for the Coventry Ambassadors scheme has been awarded to Coventry University and they are now looking for over 300 people to play their part.

Funded by Coventry City Council, the Coventry Ambassadors scheme will work in addition to the existing sport volunteer project in close partnership with the Council, Voluntary Action Coventry and CSW Sport.

Councillor Mal Mutton, Chair of Coventry City Council’s Cabinet Advisory Group for the Olympics, said: “We have every confidence that the Coventry Ambassadors scheme will prove to be a resounding success and yet again enhance Coventry’s reputation as a welcoming and friendly city. The Olympics present a once-in-a-lifetime opportunity for the city to be a showcase to visitors from all over the world and we are determined that they leave Coventry with a positive, lasting memory of their visit.”

He said: “The development of high quality volunteers will be crucial in supporting future national and international events in the city. It will show how the scheme will demonstrate a developed volunteer infrastructure which will bode well in attracting other major events to Coventry.”

The London Organising Committee for the Olympic Games (LOCOG) along with the Government Olympic Executive (GOE) highlighted that there would be a requirement for additional ‘city’ volunteers other than the 70,000 ‘Games Makers’ in London and other co-host cities across the UK, to provide a high quality visitor welcome for the unprecedented visitor demands on London and across the UK during the Games period.

Councillor Mal Mutton added: “This is a wonderful opportunity for anyone who would like to be part of a truly global event. The Coventry Ambassador scheme has a clear remit, which is to provide a front-line visitor welcome during the Games at key transport hubs, public spaces, visitor hotspots, live sites and around our Olympic venue.

“It is a vital role and one that I know David Boughey and his team will rise to the challenge of managing. It’s a welcome boost and a show of confidence in the University.”

It is intended that the Coventry Ambassadors scheme will act as a volunteering legacy for Coventry through the creation of a team of enthusiastic, well trained and knowledgeable volunteers who are available to attend and support future events across the city.