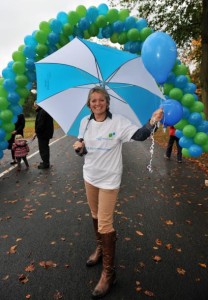 Mary, who for over ten years was the leading sports presenter on BBC News set walkers off to raise money for local Alzheimer’s Society services. Over 200 people stepped out to take part in one of the three walking distances available in Cannon Hill Park and over £8,000 is estimated to have been raised to help local people with dementia and their carers.

‘Alzheimer’s Society is a cause close to my heart as my mother-in-law was diagnosed with Alzheimer’s Disease two years ago. For this reason I understand how the organisation is able to support other people with the condition.

‘The Memory Walk gives us the opportunity to really make a difference to those who are living with dementia in Birmingham, and every penny raised will be used to support local Alzheimer’s Society services.’

Emma Dowler, Community Fundraiser for Birmingham, said: ‘It’s great that so many people have stepped out today despite the rain, to rock and roll and walk around the park.

‘There are almost 10,400 people living with dementia in Birmingham and this is expected to rise to over 12,000 in the next ten years. That is why Memory Walk is so important as it raises vital funds for local services for people with dementia and their cares such as dementia cafes and support groups.’

Anna Taylor, 58, from Stechford took part in the walk, she said: ‘I’m here today walking for my sister-in-law, Val. It’s such a great atmosphere and it’s lovely that everyone has got together for such a great cause.’ 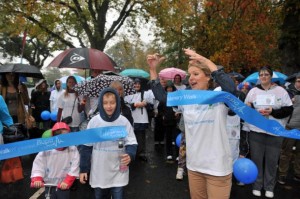 Memory Walk 2011 is being held in partnership with Bupa. Together, Alzheimer’s Society and Bupa aim to support more people living with dementia through the vital funds that are raised.

Alzheimer’s Society supports people to live well with dementia today and funds research to find a cure for tomorrow. It relies on voluntary donations to continue working. You can donate now by calling 0845 306 0898 or visiting alzheimers.org.uk