Work to create the first new urban park in Birmingham for over 125 years began this week. 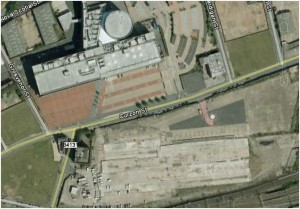 Funded by Birmingham City Council the £11.77 million park adjoins the current development site for the new Birmingham City University campus, and has been designed to sit alongside the Government’s proposed High Speed 2 Station.

To help enable work on the park to begin the council will also this week officially hand over a number of dedicated parking bays within its new £11.8 million Eastside multi-storey car park to Millennium Point. These bays will be used as replacements for the car park currently in front of Millennium Point, the land for which is to become part of the park itself.

In addition to dedicated spaces for Millennium Point the new car park will also provide more than 500 public car park spaces for future visitors to the park and other developments set for the local area.

Being developed by Wates Construction, Eastside City Park will measure approximately 28,000m (the size of 22 Olympic swimming pools) and feature 400 trees, a canal feature running 190m and incorporating 25 jet fountains. Feature lighting will run through the park as a mixture of LED and fibre optics provide ambient lighting to welcome visitors into the evening.

Adjoining the Park will be a specialist Science Garden being developed by Thinktank, work on which is also expected to begin shortly.

Originally granted planning permission in late 2009, plans for the park have been refined over the past 12 months to take account of impact of the Government’s High Speed proposals which resulted in the relocation of the BCU campus. Development work is expected to take 15 months with the Park due to open in late 2012.