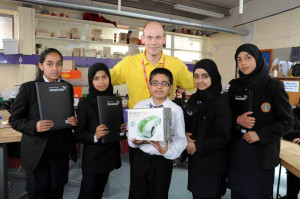 Designed to highlight the important role hydrogen can play in meeting future, low-carbon energy demands, the workshop featured a number of experiments and pupils got the chance to build their own hydrogen and solar-powered model cars.

On the back of the experiment, Birmingham Science City’s ‘Big Hydrogen Challenge’ is now open to 11-14 year olds nationwide to design their vision of the hydrogen car of the future, with the chance to win the latest hydrogen-powered model car.  Entry forms and further details are available at birminghamsciencecity.co.uk. 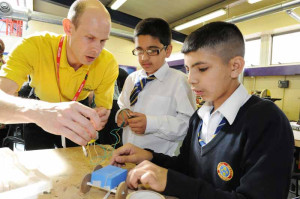 Dr Pam Waddell, Director of Birmingham Science City comments: “Both the experiment and our  Big Hydrogen Challenge have been designed to show children that science is not just restricted to the classroom, but has many important and exciting applications for our future.

“The team had a great time at Small Heath School and hope the pupils were encouraged to think about future energy sources and applications.  Birmingham Science City is leading the way in the generation, storage and use of hydrogen and other low carbon technologies through its Science City Research Alliance activities.  We hope our visit will spur some of the future scientists of Birmingham to find out more.”

Peter Slough, head teacher at Small Heath School, adds: “Making science fun and interesting is a great way of engaging pupils and the Big Hydrogen Challenge has really captured the imagination of our students. Many of them are realising just how important science is for the future and why studying it at school is so valuable.”

Birmingham Science City is a regional initiative which develops and uses science and technology to improve the prosperity and quality of life of the West Midlands and the UK.

The Big Hydrogen Challenge is open to all 11-14 year olds.  Entry forms can be downloaded from birminghamsciencecity.co.uk.  Entries should be sent to Katie Allsopp, McCann Erickson Communications House, Highlands Road, Shirley, Solihull, B90 4WE, or katie.allsopp@europe.mccann.com.  The closing date is 9 September.

To watch the video of Thinktank and Birmingham Science City’s visit and find out more about how powerful hydrogen can be, go to birminghamsciencecity.co.uk.

Birmingham Science City is a region-wide partnership of public sector, businesses and the research base, which is facilitating the use of science and technology to improve the quality of life and prosperity of the West Midlands.  Funded by Advantage West Midlands, Birmingham City Council and the Region’s Universities, Birmingham Science City’s aim is to create strategies to exploit centres of world-class scientific research, by developing relevant activities for sustainable economic and social benefit.