Exactly three months ago, on 9th April, this website published an article calling for the shutdown of the News of the World. 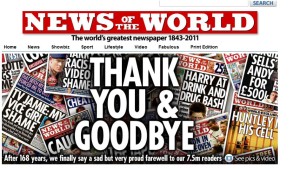 Thank you and goodbye

Now it has happened. And though it was inevitable- you cannot have a free press that is littered with publications that use information like a fascist bully uses fists and bullets- it is a sad day for all of us.

And that is because it shows how we, as a culture, accept these lice ridden papers to exist in our daily lives.

Ironically, it wasn’t a lobby or a campaign or a politician that killed off the NoW, but the morally suspect Murdoch family that killed its own child.

It closed the paper for two main reasons:

++it realised that you don’t  cross the line on two issues: being seen as attacking the memory of child murder victims or war victims who are universally cast as heroes.

The NoW was seen to be an odious spy into the lives of the people who are linked to these groups. And that, plus the advertising crisis, meant it had to go.

Culturally and media-wise, this really is no great loss. Yes, the paper splashed some big stories: corruption in sport, how Sarah Ferguson used her dubious links with royalty to make money and many other tales with legs.

But the backbone of its tacky reporting was based on criminal activities now well known by all of us. And it had to be recognised by every editor who was in charge during this time of hacking: either an editor knows what is going on in a newsroom and is a criminal or else he/she is incompetent and should be sacked.

The NoW staff were (or still are technically) i-bullies. They used sensitive private information from individuals’ lives to spread misery and fear.

As for the workers at the paper, let us make one thing clear. To paraphrase a line from The Godfather: ‘..No one put a gun to our heads and said you had to enter this world. We made that decision. There are no excuses.’

Each journaslist knew the job, the salary (and, yes, the expenses) were based on criminal  and morally repulsive activities and a worldview that everyone’s life is open territory for anyone with hacking skills.

Goodbye News of the World. You won’t be missed.