Serrated axes, throttling reeds, circular-breathing trumpet tones and yowling or multiphonic vocals: all of these infest the mean streets of Manhattan and Brooklyn, whether Martin Longley deems them to be rock, jazz or just plain deranged… 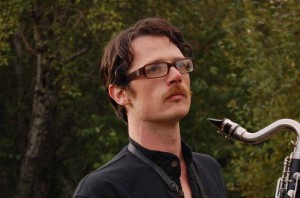 When I first witnessed the singer, reedsman, guitarist and performance artist Arrington De Dionyso at The Stone, he was working as a solo act, exploring extended timbres, textured multiphonics, confrontational starkness and isolated honking eruptions. In more recent times, this Olympian (that’s Olympia in Washington) has been applying these out-there improvisational strategies to the rock’n’roll zone, forming the Malaikat Dan Singa group, and upping the volume, density and intensity considerably. I subsequently caught him at The Knitting Factory with this combo, and days before playing at the Lower East Side’s Cake Shop, he was at the Issue Project Room, Brooklyn’s home of experimental sounds.

We shall deem this a rock combo, in the absence of a more accurate term. The Malaikat trio nevertheless still retains copious stylistic tics that will ensnare admirers of free-form jazz, as well as South East Asian musics, post-punk, noise-droning and Captain Beefheart, at home in his Trout Mask Replica log-cabin. On that previous Stone occasion, De Dionyso wasn’t playing guitar, but it’s now a central part of the Malaikat attack. Like B.B. King, De Dionyso doesn’t sing at the same time as riffing. Well, not very often.

How to describe his stance? De Dionyso appears akin to a somewhat deranged yoga instructor, throwing ceremonial shapes and singing in a deeply guttural growl that’s informed by Mongolian and Tuvan throat-singing techniques. This is where Huun-Huur-Tu meets Napalm Death. After only one number, off came his shirt, and he’s moving mantis-like, reaching for the Cake Shop’s glow-light spangled ceiling, or striking right-angled poses with his forearms. The drums and bass were locking together in a tightly funk-rocked twitch, recalling the severe syncoptations of the veteran English trio Blurt.

On this evening, when he’s picking up a horn, it turns out to be the bass clarinet, which is perfect as a throaty, guttural extension of De Dionyso’s multiphonic vocal techniques. Gruff and ragged, he makes a very voice-like sound, gobbling away at the reed, pecking, clucking and squawking deeply. Once again, images of Beefheart’s Trout Mask era slam towards the eyes. As a guitarist, De Dionyso makes compact riff patterns, angular and strafing. Small melodies with a compressed nature. Serrated to kill.

To the uninformed (me, before De Dionyso made a reference onstage), the leader’s vocals might sound like some strange invented dialect, formed especially for rockin’ extremity purposes. Apparently, though, he’s singing in the Indonesian tongue, which kinda fits together with the Oriental bodily postures. The band-name translates as Angels And Lions. So, to marry meditational Eastern studies with an urgent punk savagery is one of the more unusual methods, even within the realms of avant rock. This is a band that was making its audience dance, or at least contort, whilst remaining ultimately and gloriously inaccessible.

Lately, the guitarist Mary Halvorson has been growing markedly more aggressive in both her soloing delivery and her choice of sonic texturing. Her array of effects pedals appears to have been multiplying, leading to greater adventures in mangling, distortion, pitch-pulling and bent metalling. Her style has been developing and evolving at high speed.

For this quintet gig, though, Halvorson chose to remain with her core sound of avant Wes Montgomery shimmering, tonally slanted sideways into a glowing refraction of the jazz tradition. The evening’s repertoire was a premiere of material destined for Halvorson’s next quintet disc, set for a recording session in July. This might be why the mood of the gig was mostly cool school rather than that now accustomed attack mode, as when caught in her own trio setting, or with new pals trumpeter Peter Evans and drummer Weasel Walter. The thrust of this quintet is directed towards compositional substance, thoughtful themes and a more sly-footed approach to innovation.

The horns were equally divided between heads and soloing activity. Trumpeter Jonathan Finlayson and alto saxophonist Jon Irabagon were less extroverted than would be typical for most of their appearances, particularly the latter. This was less of an ego thrill, more of a shared service to the overall responsibility of the collective music. The set was warmly negotiated, but the normally closely charged atmosphere of Joe’s Pub didn’t catch fire into its potential sparking intimacy. Halvorson’s tunes probably desired a few more airings, so that they could relax into a greater, looser expressiveness. Once the album hits the shelves, these new pieces will have grown and developed, and subsequent quintet dates will be hotly anticipated.

When Brooklyn black metallers Liturgy opened for The Ex at (le) Poisson Rouge a few months back, the gathered audience was relatively small. This local neighbourhood show was different, being the record release celebration for their Aesthetica, on Chicago’s Thrill Jockey label. What can only be described as hype appears to have engulfed the combo, coupled with the controversy surrounding their upsetting of the mainline metal community with their apparent intellectualising of the form. This is all words, to a certain extent. Simply listening to the music doesn’t prompt such difficulties of definition, particularly to those of us who are prone to wide-ranging aural activities. The problem apparently lies in the attitude of mainman guitarist and singer Hunter Hunt-Hendrix (not a name to avoid the wry uplifting of an eyebrow), who allegedly has a penchant for penning essays on the state of the music, when he should be perhaps out there rocking. All of this sounds like knee-jerk over-reaction from a closed community, but Liturgy are almost asking for the attention by deliberately flirting with the genre, at the same time as desiring the so-called sophistication of the experimental noise-monger.

Laughing all this off, perhaps what should be addressed is the fact that Hendrix’s voice, when the band choose to play songs, is much too high-pitched for this deepcore unleashing of the Satanic spirituality. It’s a limited yowl with a raging-child frequency, fine for a few outings, but ultimately it would be preferable for a greater ratio of instrumentals. This, when the twinned lead guitars and lone bass are rammed into colliding shapes, is when Liturgy sound at their most powerful.

The Brooklyners also suffered from following Sightings, a trio from the same borough who seem to just get down and subject their grind to all manner of jagged electronic doctoring without any self-consciousness. Their pieces gave the impression of possessing an improvised danger, even if they were in reality pre-ordained. They had just the right amount of untogetherness, teetering on the edge of fragmentation, yet capitalising on the tensions this created. Liturgy, by comparison, offered little space to move.

Each year, the Vision festival bestows lifetime achievement recognition on an artist (by definition a veteran) who has made a significant mark on the free jazz landscape. For their sixteenth edition, eyes have turned to Germany, and the recipient is reedsman Peter Brötzmann, surely one of the form’s most extreme practitioners. This 70-year-old has always emphasised his stamina in the blurting wall-of-sound realms, but he’s also partial to the occasional bout of calm reflection. When a player’s core revolves around the grizzled macho howl, what happens when he becomes a septuagenarian? Brötzmann’s response is to arrive straight from the airport and proceed to play three sets of music, only taking a brief break while the young Pulverize The Sound trio displayed how they doubtless hold him as one of their chief influences.

The evening’s theme was one of unusual line-ups. The opening quartet set featured a drummerless combo, with two bassists, William Parker and the less-expected Eric Revis. Brötzmann was partnered by the equally versatile hornman Joe McPhee. Even though the front line would take a predictably rugged approach, there were many instances of holding back for contemplation, with the bass back-liners becoming the front line, themselves switching responsibilities for bowing and plucking possibilities. This was an establishing set for the night, and it was the following duo performance that really shook the sensibilities.

Even though Brötzmann was aiming for the marathon session, the night’s second set allowed him to pause in the creation of raging cries. A duo with the Chicagoan vibraphonist Jason Adasiewicz was naturally spacious, although still startlingly forceful. Adasiewicz is surely the most physical vibes-striker I’ve ever witnessed. He’s taken his technique into the furthest reaches, using his entire body to fuel the force of each rhythmic blow. His manner is highly percussive, yet nimble, possessing the emphatic thrust of a bluesman, as he’s stamping feet on his too-fragile-looking sustain pedal. Adasiewicz was also concentrating more than most on the bowing potential of his instrument, creating an entire sequence of hovering shimmer. Brötzmann was nudged towards a less burred tone.

When, finally, the German took a rest, his New York heirs rose up in a frenzy of choreographed noise, composed in a fashion that suggested the end-results on an improvisation. Breathless headbanging riffs took on the light steps of precise arrangement, as trumpeter Peter Evans, bassman Tim Dahl and drummer Mike Pride made their sonic assault. Initially, Dahl’s excessively distorted (and ultra-trebly) electric bass seemed a touch too thin over heavy duration, but soon the ears adapted (or were driven into submission), and the pelting machine-gunning could be heard uninhibitedly. Evans was switching between pure bugle-trilling and scuffed up-close bell-chundering. The trio’s set was a thrill for both the guts and the ganglia.

Call me a traditionalist, but it was the more hell-raising quintet set that achieved Brötzmann’s greatest ascension of the evening. He was partnered by fellow reedsmen Ken Vandermark and Mars Williams (the latter recalled as a member of The Waitresses), which amounted to a barrage of equally adept racket-sculptors. Even though these pair would often transcend the sonic limits, there were several occasions when Brötzmann was lurking silently to the side, only to weigh in at an opportune moment with headlong blasts that were even greater than theirs: this is not a typical septuagenarian. Drummer Paal Nilssen-Love was not as astonishingly intricate as usual, here depended upon to deliver a harder, less detailed drive to ensure the group momentum. This was Brötzmann at his more predictable, but there was no finer way in which to climax this celebratory night. Anything less would have been an anti-climax.