Down in Gowanus again, a few blocks away from its toxic canal. That proximity doesn’t impair The Bell House’s ability to present great music, or even discourage folks from sitting outside in the newly-arrived swelter. How charming, to be hanging out in Brooklyn’s industrial quarter, quaffing Blue Point blueberry ale, and inhaling the fumes from the nearby organic bratwurst truck!

Inside, it was almost impossible to avoid the dancefloor’s pull, once the Refugee All-Stars began their two-hour show. Even though the audience for this Saturday night holiday-weekend gig was relatively diminished, it could boast one of the highest ratios of dancers to non-dancers, so infectious was this fusion music from Sierra Leone. Perhaps the term fusion is misleading. I’m using it to illustrate that this band doesn’t simply play indigenous music, it’s also reaching outwards to Congolese soukous, Nigerian Afrobeat and, perhaps more crucially, Jamaican ska and reggae. All of these stylistic traits are sieved through a governing band personality, so the tunes don’t sound as though they’re jump-cutting impatiently. Each shifting of emphasis was seamless, and actually provided a potential for keeping the footwork varied amongst the crowd.

This band has its foundation in bad fortune, its members being literally refugees from Freetown, back in 1999. They appeared in a documentary film about their enforced situation, camped out in Guinea. They made an acclaimed album, released in 2006. They began touring the globe, ultimately becoming an outdoor summer festival hit. Now, the All-Stars are pushing another disc, Rise & Shine, having evolved into a tightly ongoing concern.

This was one of the year’s most compulsively danceable gigs, right from the outset. The band’s guitar lattice-work engaged the mind, even whilst the feet were shifting beats and hitting the floor in time with periodic bomb-drops from the percussion. The reggae numbers offered some respite, but even some of those were taken at a ska-jumping pace. The combo’s shared vocals also provided substantial matter for mulling over, even as the bounding and bouncing continued. Most bands will occasionally slump when attempting such extended dance action, but these All-Stars completely sustained their momentum throughout, in terms of both the heads and feet of the audience. Quite an achievement, methinks…

Just under a week later, the venue presented one of its three-band marathons, always a hot proposition, particularly if the acts are attuned with each other. Upon arriving at the outside tables, pre-show, it was easy to spot the opening band, as Smokey Hormel was in full Texan regalia, ten-gallon hat perched precariously on his head. Even though he’s originally outta Los Angeles, this Brooklyn cowboy’s Round-Up can be found playing regularly, only a few blocks away from The Bell house, at the much smaller Barbès bar in Park Slope, or at Sunny’s Tavern in Red Hook.

This Bell House set was one of their bigger ventures, with an initially sparse crowd growing as folks arrived for what was destined to be a long evening of country-derived sounds. This was no ordinary rodeo-brawling gang. Singer/guitarist Hormel is a prince of irony, transmitting on low frequencies that inhabit the Johnny Cash regions. Hormel has enjoyed a highly diverse career, doing time with The Blasters, The Red Devils, Cibo Matto, and more recently Forro In The Dark. The Round-Up’s fiddler happens to be Charlie Burnham, normally sighted on the avant-improvising circuit, gigging with the likes of James Blood Ulmer. Sawdust-kicking Western Swing songs are delivered with virtuosic flash, and the combo benefit from their regular-residency stability. Humour of different types was central to this evening, as was a speeding instrumental dexterity.

Also closely identified with Los Angeles, though born in Boise, Idaho, and lately dwelling in Boston, singer-guitarist Eilen Jewell is another breed of country artist. Here. the humour is more subtly intertwined with her song-craft and demeanour, and Jewell’s methods lie closer to the mainline troubadour tradition. She could be described as a singer-songwriter, but invariably has a Nashville twang to her tunes. This is blended with a garage punk sensibility, even though this might be disguised or refracted away from the hardcore.

Jewell dealt out generous selections from last year’s Butcher Holler album of Loretta Lynn interpretations. This was an ideal choice for the night’s middle act, as she offered the chance for a more introverted sequence of songs. That word is only being deployed due to the excessively outgoing nature of Smokey Hormel and headliner Big Sandy, who completed the evening’s possibly unintended Californian theme.

Already, we’d witnessed a pair of substantial sets, and Big Sandy was perhaps unwittingly heading for the early morning. It appeared to be a naturally ongoing curve of manic enthusiasm, as his set progressed deep into the night. The crowd steadily dispersed, but so recklessly driving were Sandy and his Fly-Rite Boys that this didn’t seem to matter. Those of us who remained were caught up in the undimming excitement. Here, the humour was more overt, punctuated by frequent requests for tequila shots to be sent across from the bar.

Big Sandy is now a veteran, as this band began their upending of rockabilly and country music way back in 1988. The leader still boasts the mind of a youngster, though, and the Boys are still playing with the powerhouse precision and gusto that their name promises. Whether slugging at high speed, or crooning into the reverb chamber, all of Sandy’s songs are powered by a rock’n’roll desperation. His right-hand man is lead guitarist Ashley Kingman, who just kept on ploughing through solo after twanging solo. Sandy guests on Eilen Jewell’s new album, so it was no surprise that she returned to the stage for what amounted to a calming-down measure, lest the Big man become too accelerated. All the clowning around didn’t interfere with a committed history lesson in American roots music. Or should that be the other way around? Clowning is probably the wrong word to describe Sandy’s slightly sleazy, demented subversion of glitzy 1950s entertainment rituals. A punkily tattooed desecration of bobbysocked purity is requested, nay, demanded from the audience.

The Dirtbombs/Dennis Coffey
The Bell House 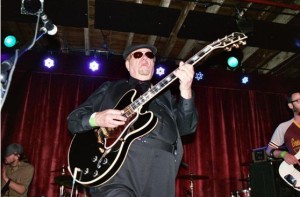 Speaking of punk, the very next night, Brooklyn’s home of inspired variety saw a curiously sympathetic matching between a guitar veteran and a team of twitchy garage rockers, both acts hailing from Detroit. Dennis Coffey is too individual to be termed a session man, but he has nevertheless appeared on countless records from the Motown house, and way beyond. When that label entered the psychedelic ’70s, he was there, soloing on cuts by The Temptations, Edwin Starr and The Isley Brothers. He also played with Parliament, and has been heavily sampled by numerous hip hoppers. The Dirtbombs project a punk rock image, but their sound goes surprisingly further, into the realms of 1970s disco and no wave (an odd mixture), and thence into 1980s electro, all the while using the MC5 as a foundation. They’ve now been together for nearly two decades.

The combo backing Dennis Coffey appeared to be treading their way as if this was a new relationship, but if so, their rapport has been built up swiftly. Their keyboardist was efficiently cue-ing each switch in the music, which was mostly instrumental, and primarily acting as a vehicle for Coffey’s always-rapturous soloing. As it should be, this outfit revolved around the man and his axe, but this is not say that there weren’t other bonuses, such as the guesting singer, a rawk and soul chick rolled into a single being. Coffey was throwing out a stream of always-frazzling statements, combining icepick soul-picking with surging psychedelic waves. His solos were like miniature stories, flowing through their logical narrative evolution, and inevitably reaching catharsis-level to climax.

The Dirtbombs revolve around singer/guitarist Mick Collins, formerly of The Gories. He spurs the band with uninhibited energy, sticking to a fairly brutal straight line, with drumming beats that emphasise a rigid, twitchy symmetry, albeit played with dogged fury. Their songs moved subtly along their unsubtle style-path, throwing in a surprising amount of diversionary tactics, stepping sideways from the hallowed garage ground. Thus, they create their own unique fusion. At first, most of the numbers were too brutally metronomic, but as the set progressed the Bombs became increasingly unhinged, heading further into the Stooges zone of extended rock chundering. The show ended with a lengthy drum freak-out, which wound up as an exercise in minimalist meditation, before the band returned for the blow-out proper. The evening’s two acts combined into a veritable embodiment of all that’s expected from Detroit’s pungently urgent music scene. 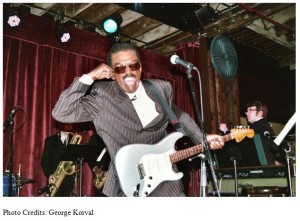 The Bell House is also a second home to the Dig Deeper DJs and promoters, when they’re presenting artists that are too likely to fill Southpaw in Park Slope. Just before the Undead Jazzfest’s late night improvisation session in the same room, they held an early-evening party for singer, guitarist and occasional harmonica-blower Syl Johnson. This meant that the show had a tight curfew, but it seems that Johnson is accustomed to playing sets that are not much over an hour’s duration, so not much of a compromise was required.

Hailing from deep down in Mississippi, Johnson’s roots are as a blues sideman, playing for the best. We’re talking Jimmy Reed, Magic Sam, Junior Wells and Howlin’ Wolf. It was Johnson’s 1970s work for Hi Records that went on to form the heart of his reputation as a soul man. This was also the home of Al Green, governed by Willie Mitchell’s production prowess.

As usual, the evening’s star attraction was backed by The Sweet Divines, a combo that have developed into prime Brooklyn soul interpreters. The singers who give the band their name, and their horn section, supplied an underlining dialogue, whilst Johnson took over the raw, lowdown tones and the occasional understated guitar solo embellishment. Garbed formally in suit and tie (but sporting shades), his personality comes across as a mixture of ornery and jokey, commanding and casual. Johnson’s authority allows him to pepper a smooth entertainer persona with social comment and cussing interludes. He’s old-fashioned, but also sly and sharp. The brightest-shining moments might have been slightly predictable, but who can resist the classic sting and swell of “Is It Because I’m Black?” and “Take Me To The River”?

Eilen Jewell plays at Birmingham Town Hall on the 28th of October, 2011. Her new album, Queen Of The Minor Key, is released on the 1st of August…