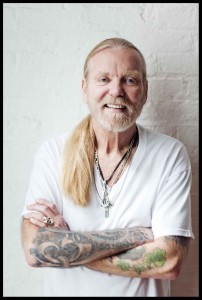 Richard Lutz doesn’t get bangs for his bucks from the Greg Allman shows that landed in Birmingham.

But at Symphony Hall this week end, the living half of the late Allman Brothers was backed by competent session men and no big names.  I mean, like, wow, I mean, where’s that at man? Huh? Session men?

And it sounded like it too. It was all OK, a constant reference to better days; a roll out of hits from the 1970’s; and a bit of high volume music. But overall, it was  lift music, rock and roll brought to you by Otis Elevators in fact.

To be fair, the 63 year old organ player has had a liver transplant, six marriages and the death of his brother Duane to contend with. But, hey… you pay your money and expect a little more.

He’s on his second tour of the UK to pump his new solo album Low Country Blues. But, really, it was only in the inevitable encore (why do we have to stand clapping like monkeys for five minutes before the band comes shambling back on?) that things got moving with an acoustic country blues piece that was superb and then an Allman Brothers standard of Statesboro Blues.

So with Dr John and T Bone Burnett gone (and Steve Miller Band no longer opening for the musician) it was down to Greg. He looked tired and with a 3 month tour  ahead of him, he has an unenviable work schedule. Maybe he was conserving his energy or something. His standard Hammond organ riffs were hardly noticeable and he seemed to play rhythm guitar more than the keyboards.

One note of light- the backing group might have been more or less no names. But the accompanying piano player Bruce Katz knocked the socks off of Greg and his Hammond at the opposite end of the stage. This guy can bang it out and he played like he was being interfered with by a randy ferret. A quick whirl around Google shows he’s been on the road and knocking off CDs with his own blues band for decades. Maybe give Bruce Katz  a look in.