The idea of giving business a helping hand to redevelop Paradise Circus by making it part of an ‘Enterprise Zone’ seems to have fallen flat because the council and the developer didn’t understand the rules. 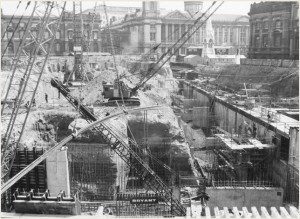 A month ago Gary Taylor, the developer for Paradise Circus, was reported in the Birmingham Post (23 June) as saying that he was under no illusion over the challenges that lay ahead, particularly in closing the funding gap that existed in delivering the Paradise project, which he believed the Government’s new enterprise zones could play a major part in. Taylor was convinced that the new Enterprise Zone would create the opportunity to maximize the potential of Paradise Circus as one of the most strategically important development sites in the UK. ‘Over the next 18 months’, he said, ‘we [Argent plc and he] will be making a significant commitment to creating the opportunity for comprehensive re-development within an enterprise zone framework’.

Paradise Circus is in fact doing quite nicely at the moment and doesn’t need any extra help like Business Rate holidays to kick start regeneration. It has a working library, a thriving mini-mall with shops, pubs and restaurants, two office blocks, a hotel and a school of music. Re-developing Paradise Circus will simply displace all of those existing businesses and replace them with something else, which is the opposite of what Enterprise Zones are intended to do. Hence the headline in the Birmingham Post of 17 July, ‘Enterprise zone dream comes crashing down’.

So it seems that business is still looking for government handouts to compensate them for the depressed state of the commercial property market. As I pointed out in my article ‘Handouts or Investment’, the business community feels no shame in putting out their begging bowl as if support from the public purse is a natural right for which they don’t even have to make a case. When the business-orientated Post called this latest attempt to bend government policy to their own ends a ‘dream’ it exposed it as poorly thought out and smacking of desperation.

It is as clear as daylight that market conditions rule out the comprehensive re-development of Paradise Circus immediately following the closure of the Central Library in 2013. It makes no sense therefore to demolish everything on Paradise Circus in 2014 if there is no immediate prospect of re-developing the entire site in one phase. Going by what has been said about other schemes such as Arena Central, market conditions may not favour the comprehensive re-development of Paradise Circus for another twenty years, if not for ever.

So, rather than have an empty site surrounded by hoardings for many years it makes sense not to demolish anything until re-development proposals are a dead certainty and can be implemented within a published timescale. The alternative is what we see now at the site of the demolished Edgbaston Shopping Centre at Five Ways where the optimistic hoardings proclaiming an exciting future have been up so long that they are falling into disrepair. 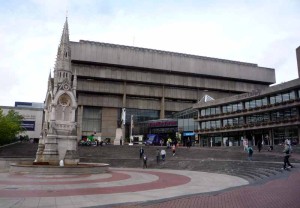 It also makes sense for all the existing buildings in Paradise Circus to go on being usefully occupied for as long as possible – which could be at least the next 10 years in my view. I feel sure that everyone involved with Paradise Circus, including the public, would appreciate an assurance from Argent that they will not have to face the huge disruption of comprehensive redevelopment during that time. What can be more reasonable?