Motorsport engineering students at Coventry University will be aiming for the top step of the podium at Silverstone next weekend, just a week after Jenson Button and Lewis Hamilton wow home crowds at the British Grand Prix. 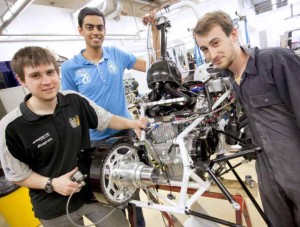 The students – who make up the Phoenix Racing team – have worked together over the past six months to design and build a single-seater racing car from scratch for the prestigious Formula Student competition.

Coventry’s team will compete against over 130 entries from universities in 31 countries including India, Russia, the United States and – for the first time – Middle Eastern teams such as Palestine.

Phoenix Racing, which has been entering the Formula Student competition for over ten years, is run exclusively by Coventry University students, with minimum input from supervising staff.

At the start of the project, the students split themselves into sub-teams, each working on an area of the car including chassis, engine and drivetrain.

This year’s machine is set to be the most sophisticated yet, with the students taking full advantage of the University’s fully-equipped motorsport workshop and advanced engineering facilities to give them the edge.

The car is powered by a Honda CBR600F3 motorbike engine to ensure it is as light and as powerful as possible, and features a sophisticated F1-style paddle-shift gearbox which is powered by the engine’s oil pressure.

The team comprises some of the same students who worked on the prize-winning evGrandPrix project, which saw the Coventry University squad claim third overall in America’s prestigious Electric Vehicle Grand Prix at Indianapolis in May.

Dan Priestman, third year motorsport engineering student and Formula Student project team leader, said, “It’s been a lot of hard work and late nights, but the whole team is confident we’ve come up with our most competitive car ever. There are some cool, clever engineering features on the car which we hope will pay off.

“It’s great to be able to put into practice everything we’ve learned on the motorsport engineering course. At the end of the day, this is what it’s all about – getting your hands dirty building real life racing cars!”

The Formula Student competition, which is run by the Institute of Mechanical Engineers and supported by Jaguar Land Rover and many luminaries in the Formula One world, pits universities against each other in a test of technical and driving skill.

Students must demonstrate creativity in design, technical understanding and – above all – good team work and communication to overcome the challenges along the way and ensure the project is completed on time and on budget.

The cars are then tested and judged by a panel of industry professionals, who score it on different dynamic aspects such as acceleration, grip, manoeuvrability and engine efficiency.

Ross Brawn, Team Principal of the MERCEDES GP PETRONAS Formula One team, said, “I never fail to be impressed each year by the amount of talent shown by the Formula Student competitors. When it comes to giving the younger generation of engineers a chance to demonstrate their skills, there really is no substitute for Formula Student.”