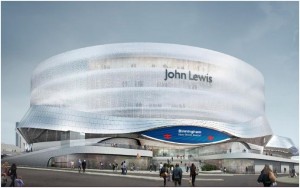 Steve Beauchampé looks at aspects of the Birmingham Gateway/New Street station redevelopment, and takes issue with some of Alan Clawley’s recent arguments.

From an architectural and aesthetic standpoint, it is hard to think of a single redeeming feature of Birmingham’s New Street station site. Outdated, brutal and often ugly, the station, it’s infrastructure and attendant buildings cover a sizeable block of the city’s central core, their unrelenting mass and long, drab frontages severely limiting pedestrian movement and repeatedly intervening invasively in the public realm.

When the New Street Gateway redevelopment project was announced in 2008, I was hoping for nothing short of a complete demolition and rebuilding of the entire site, creating new vistas, pedestrian routes and a major public square, as happened with the Bull Ring a few years ago (although I harbour major reservations about the results of that project).

It was not to be; instead, externally, the £400m Gateway project will see the existing station buildings re-clad in a wavy stainless steel skin (the work of Foreign Office Architects), the creation of a new entrance at the junction of Hill Street and Station Street (officially referred to as the ‘Southside Development’) to replace the current dingy and damp steps on Station Street opposite the Old Rep theatre, and a significant upgrading and enlargement and of the existing Navigation Street entrance, which will be extended back into Stephenson Street.

The metallic skin however looks somewhat cheap and cheerful, a glam coat to cover the sins of the 1960s that lies beneath, horrors waiting to be uncovered by a future generation when the station’s next makeover occurs.

Although Gateway fails to address the problem of New Street’s narrow approach tunnels (an intractable problem at the eastern end following the lamentably short-sighted decision in the late 1990s to allow the Bull Ring developers to implant foundations over the space required for track widening) overall, the project will substantially enhance the station and its environs and improve upon several of New Street’s more glaring deficiencies.

Internally, there will be several welcome changes, with the new concourse approximately 3.5 times larger than the current one and lit by a large glass atrium to create a brighter interior, filled with natural light.

In his recent article on this website Alan Clawley stated that the new Hill Street/Station Street entrance will be the redeveloped facility’s official main entrance. True, however this moniker is surely more to do with the desire to encourage land owners, property companies and the business sector to redevelop the generally shabby neighbourhood immediately beyond (‘Grade ‘A’’ offices/retail opportunity, just 1 minute walk from the main entrance to New Street station’) than the number of people who will climb the entrance’s ‘Spanish Steps’ (!) and pass through its doors.

In practice, the station’s principal pedestrian access points are likely to remain via escalators linking the station concourse with a heavily revamped Pallasades shopping centre and the aforementioned Stephenson Street/Navigation Street entrance, located as it will be alongside the planned Metro extension terminus.

From the CGI visuals on the New Street New Start website it appears that at what we today know as the front of the station (facing the Bull Ring), there will be two entrances (one as now beginning alongside the TX Maxx store, the other a newly constructed, pathway leading from near the Rotunda and down past the rear of the Odeon towards Platform 1), while the current short stay car park and taxi drop off point will disappear (the latter moving to Station Street), the concourse extended out under the existing line of the Pallasades. This area was crying out to be redeveloped as a public square and piazza but from the available images the opportunity appears to have been missed.

Returning to the Hill Street/Station Street access point, where Alan Clawley suggests that the rear of the new 250,000sq ft John Lewis department store will dominate the station, force forward its entrance and knit uncomfortably with Gateway’s stainless steel fascia. The marriage of these two buildings seems very harmonious, while Alan’s suggestion that John Lewis’s larger and more elevated signage makes the station appear a “mere footnote” is just wrong. Not only is the New Street sign large, it is also nearer eye level, it’s prominence accentuated by the use of supporting logos, Only the dyslexic will struggle here I think.

The John Lewis store essentially replaces an earlier proposal to construct two glass towers at the Hill Street/Station Street junction (both plans thankfully necessitated the demolition of Stephenson Tower, undoubtedly one of the worst remaining examples in the city of a 1960s residential tower block). The arrival of John Lewis in Birmingham city centre has been met with much enthusiasm but Alan’s assertions that their store is in the wrong place “facing (sic) away from the main shopping streets and stuck on the backside of a railway station”, suggesting instead that the company should have considered “adapting an existing building” are way wide of the mark. The principle of anchoring shopping centres with department stores is both well established and successful (e.g. Debenhams at the Bull Ring, John Lewis themselves at Touchwood Court in Solihull, to name but two). We can be sure that John Lewis’s presence will attract both considerable numbers of shoppers and several further good quality stores to the Pallasades (albeit probably at the expense of other parts of the city’s retail core) and that access from the New Street station concourse into the department store will be seamless, thereby enticing inside some of the tens of thousands who use New Street station each day. In fact, it’s hard to see how John Lewis’s could have positioned itself better!

There is one more very interesting and indeed welcome aspect to the remodelling of New Street station that has received little coverage but which could impact most favourably upon pedestrian movement. The plans indicate that it will be possible to walk from the Hill Street/Station Street entrance across the concourse and out through the station’s ‘front’ entrance facing the Bull Ring (or indeed between each and any of the street level entrances) without the need to traverse steps, escalators or lifts or pass through a ticket barrier. Further, these access routes will be open 24 hours per day. Effectively, this introduces a covered walkway through what has for decades been a near impenetrable multi-level assault course. Just watch out for the wheeled suitcase brigade charging towards you from all sides!