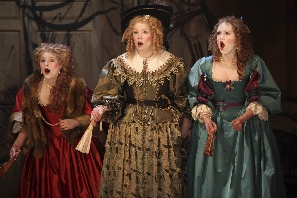 Oooo…Nothing like a ribald play filled with fops, tarts and dandies.

It sets up the week. No Jacobean menace, no Elizabethan high anxiety, no sweeping Shakespearean language that can mix up a brain after a day’s work. No, this is wanton laughs, great costumes and nudge, nudge wink, wink, fun. Frankie Howerd- land, in fact.

The City Madam is by Phillip Massinger who may have had dealings with The Bard himself as Shakespeare ended his career and Massinger begin his theatrical path.

His play was written in 1632- two decades after Our Will left the scene-  and it has to be said, was produced just as England was beginning to crack up and  nosedive into The Civil War.

So, the play is a sign of the times. Not so much royal bashing (or royal apologia) but about the society that dwelled in this land of upheaval: a society consumed with money, rank, the city life…and, again, money. Grubby, selfish money.

Character after character wants the stuff, gains it and loses it. Massinger wrote, or overwrote, with a political point about the loss of human kindness as everyone chases the filthy lucre. But, in the end, this seldom produced play could have used a good 20 percent pruning- despite its visual beauty. There was just too much material in it and to little purpose.

It was, at times, all over the place. Possibly scoring vicious points way back in Pre Civil War London, but meaning little nowadays.

Jo Stone- Fewings is the poor brother who thinks he has landed on his feet with his rich brother’s holdings. He turns from humane sibling to arch grubby capitalist inside of a scene. Sara Crowe is a great over the top panto wife only interested in her dresses and jewellery until she learns a little humility. And her two daughters- straight out  of Ugly Sister-land- are wonderful pampered grotesques played by Matti Houghton and Lucy Briggs- Owen.

Costumes are a sheer delight- and the real star. And how nice to see The Swan Theatre used once again for plays that are linked to Shakespearean heritage.