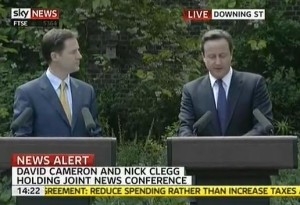 It is often said that the Conservative Party sees itself as the natural party of government. Last Thursday’s election results and the trends underlying them were a good example of why this argument has some credence.

Even as John Major’s government experienced seismic defeat against Tony Blair’s New Labour project at the 1997 General Election, ending 18 years of Conservative rule at Westminster, the party still polled 30% of the popular vote. In fact, the Tories never fall below this benchmark, unlike the Labour Party, which can sink to between 27%-30% when in opposition.

Regional anomalies notwithstanding, Conservative support held up extremely well last week, with the party even posting a small overall increase in the number of Council seats it holds. This was not surprising; Prime Minister David Cameron’s government are delivering a largely Conservative agenda with reasonable competence. No major cock-ups and after 13 years in opposition, the 36% of voters who made the Tories the largest party at Westminster just a year ago were never likely to desert them. These people voted for cuts and reforms to the NHS, the education and benefit systems and while some will feel that Government action in these areas doesn’t go far enough, most understand the constraints placed on Cameron by the coalition agreement.

On the other hand Liberal-Democrat supporters do not have the Government they want, and are unimpressed by arguments that their party’s influence on the coalition has reigned in the Conservatives more pro-free market policies, Nothing that is likely to happen during the lifetime of this parliament will persuade them otherwise. A more assertive anti-Conservative stance by the party hierarchy will have minimal impact on its election prospects given that many who voted Lib-Dem in 2010 increasingly feel that Labour offers a better alternative.

Such fragmentation of support is a perennial problem for Britain’s centre left. There is much traffic between Labour and the Lib Dems in terms of floating voters, while the Green Party, the SNP (in Scotland), Plaid Cymrd (Wales) and to a small extent Respect (principally inner city areas with large Muslim populations) offer further homes for their crosses. Even the BNP draw much of their support from traditional working class Labour voters. In contrast, with the Monster Raving Looney Party (sorry, UKIP) holding little appeal to most Conservatives, without a charismatic Blair-type figure on the soft-left to entice them, disaffected Tories generally just don’t bother voting.

Couple this with the fact that our ‘First Past The Post’ (FPTP) voting system almost guarantees the Conservatives (as well as Labour) around 200 Parliamentary seats (a statistic only contradicted by New Labour’s landslide victories of 1997 and 2001) and it’s clear that the Tories will never be a marginalised political force in the way that the Liberal Democrats have been in the past and may again so become. Oh, and the influence on the political agenda of Britain’s largely pro-Conservative national newspapers doesn’t do the party any harm either.

Yet Cameron must be careful that the Liberal Democrats don’t become too weak. While his party would win seats off their coalition partners (similar voting patterns help explain the Tories’ strong showing in this month’s local council elections), the majority of the 25 seats the Lib Dems might reasonably be expected to surrender at the next General Election will go to Labour. With the likelihood that such an election is almost four years away the two main parties still have much to play for, though to win Labour will need to both attract disillusioned Lib-Dem supporters and hope that the Conservatives current popularity with swing voters evaporates somewhat. Whether the party’s faithful have chosen the right Milliband only time will tell.

Retaining FPTP will do nothing for the electoral ambitions of smaller political parties. This problem will be further exacerbated by forthcoming boundary changes that will see a reduction in the number of MPs (a policy Cameron forced through on the back of hysteria over MP’s expense claims) just as the population is rising! Inevitably, smaller parties find it harder to win in larger constituencies (and the proposed changes will see constituency sizes standardised at around the 100,000 mark). Cameron has also quietly gone about appointing a record number of new members to the House of Lords, so that Britain is to have fewer elected representatives and more who are unelected.

Perhaps last week’s biggest surprise was the Scottish National Party winning an overall majority at Holyrood, making them the first party to achieve this feat. The SNP’s manifesto pledge of a referendum on devolution will now be implemented, most likely towards the end of their five-year term of office. Despite the popularity of both the SNP and its charismatic leader Alex Salmond, the likelihood of a ‘Yes’ vote to anything resembling full independence remains small. Opinion polls indicate only around 30% support for independence, while every other major political party in Scotland is opposed, with plenty of SNP voters also harbouring serious misgivings.

The SNP may never be more popular than it is now, yet after three or four years in power their support may have waned, further eroding the likelihood that over 50% of Scots will vote to opt out of the Union. David Cameron recently stated that he does not intend to be the last Prime Minister of Great Britain. He won’t be, though last week’s SNP success, allied to the Conservatives disastrous results north of the border, may force Westminster to beef up the powers it is prepared to cede to Holyrood in the Scotland Bill currently before Parliament. Scottish independence? One day perhaps, but incremental devolution is the more likely route for now.

Birmingham citizens should probably start preparing for a change of civic leadership in 12 months time. Labour’s progress in winning thirteen seats last week (six from the Conservatives, seven from the Lib Dems) puts them on course to wrest control of the city from the Tory-Lib Dem coalition that has run Europe’s largest single municipal authority since 2004. Despite the incorporation of Sutton Coldfield into Birmingham in 1974 and the annexation of Chelmsley Wood and Kinghurst to Solihull the following decade, Birmingham remains fertile territory for Labour.

But in another of David Cameron’s North Korean-style interpretations of the word democracy, the Government is expected to appoint Council Leader, Conservative Mike Whitby, to the post of Shadow Mayor later this year for an 18-month tenure, arming him with the considerable range of powers that an elected Mayor would enjoy should Birmingham voters support the concept at a referendum scheduled for May 2012.

So to the referendum on the Alternative Vote and the future of electoral reform. The size of the ‘No’ campaign’s victory (68%-32%) has put on hold any short-term prospects of abolishing FPTP, leaving the UK in the company of Iran and Zimbabwe as one of the few countries using the system. Electoral reform may not however have been kicked as far into the long grass as some political commentators believe. Famously dubbed by Lib-Dem Leader Nick Clegg in 2010 as “a miserable little compromise”, a more flawed alternative to FPTP from the range available would have been hard to find…which is why David Cameron offered it to the Lib Dems as part of the coalition deal! Factor in the Conservatives popularity, the Lib Dems unpopularity and what the ‘Yes’ campaign claim to be deceitfulness by their opponents and the outcome was probably inevitable. Strong media opposition to AV was just the icing on the cake.

Perhaps pitting FPTP against a genuinely more proportional electoral system (STV perhaps?) at a time when the tables of political popularity are reversed (i.e. Lib Dems popular, Conservatives unpopular) and with a Labour leader capable of rallying his party to the cause in the way that Ed Milliband singularly failed to do, might bring forth a very different result.

Oh, ok, that moment probably is somewhere out in the long grass then.