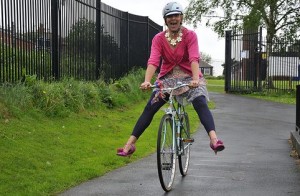 British Cycling has launched Breeze, a new national network of fun, local and flexible bike rides for women. The network is designed to help close the growing cycling gap between the number of men and women cycling regularly. Breeze will introduce over 80,000 new women to bike riding. Breeze is the biggest ever programme focused on getting more women into riding bikes for fun.

Led by women for women, Breeze bike rides are local, friendly, free and informal. The short, traffic-free rides are ideal for busy mums and anyone who hasn’t been on a bike for a while.

Breeze is part of British Cycling’s response to the growing gap between the number of men and women riding their bikes. Currently three times as many men take part in cycling regularly and the gap is growing. Yet lots of women would like to ride a bike more often.

Breeze offers flexible, safe, accessible and fun opportunities to ride a bike as well as training and support. The rides are organised by British Cycling trained local champions and fit around the work and family lives of busy women.

Natalie Justice, Breeze network manager, British Cycling says; “We know nearly a million women would like the opportunity to get out on their bikes, have a chat and socialise with other women. Breeze gives them the chance to do just that on their doorstep. We’re encouraging women to get involved and change cycling for women, forever. If you’d like to get out on your bike, whether it’s for the first time or after a long break, Breeze is for you.”

Birmingham City Council has a partnership with British Cycling and Birmingham is one of the first places to get involved in Breeze. Bike rides will start in June.

Breeze is funded by the lottery via Sport England’s Active Women’s Fund and designed to get over 80,000 women back on a bike or riding for the first time. It also aims to convert 20,000 of them into regular cyclists over the next three years, reversing a trend that has seen 35,000 women drop out of bike riding in recent years.

To find a Breeze bike ride in your local area or to find out how to become a local volunteer champion, go to breezebikerides.com

The Impact of Breeze from British Cycling