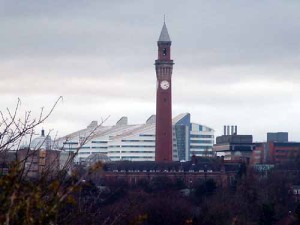 University of Birmingham and QE Hospital

Birmingham has today been named as the hub of a unique new clinical trial network with access to millions of pounds worth of life-saving drugs for blood cancer patients.

The University of Birmingham will be home to a clinical trials unit which will coordinate thirteen centres in the national network, set up by the charity Leukaemia & Lymphoma Research in response to poor survival rates for many types of leukaemia, lymphoma and myeloma.

The network is central to Leukaemia & Lymphoma Research’s vision to deliver ‘Tomorrow’s Treatments Today’ for blood cancer patients. Queen Elizabeth Hospital will be allocated a trial coordinator to help recruit patients who are not responding to current treatment. They will also deal with the time-consuming paper work associated with setting up clinical trials for promising new drugs.

Blood cancers are the most common cause of cancer deaths in the under 35s, with new figures released by the charity showing that over 12,000 people are dying of blood cancers each year. With some exceptions, survival rates have improved very little for most forms of blood cancer in the last decade.

Leukaemia & Lymphoma Research Clinical Trials Coordinator, Professor Charlie Craddock, Director of the Centre for Clinical Haematology run by the University of Birmingham and University Hospitals Birmingham NHS Trust, said: “Being part of this clinical trials network will increase the access of blood cancer patients in Birmingham to potential life-saving drugs and treatments. It offers hope to those patients who do not respond to current treatments.”

There are so many different blood cancers that it has often been seen as uneconomical to develop drugs for many types. When new drugs are available, often clinical trials are not set up because of the difficulties of recruiting enough patients at a single hospital to make them workable.

Because trials in Birmingham will be linked up to other hospitals in the new national network, individual patients with even very rare blood cancers will now be able to be treated with new drugs at the Queen Elizabeth Hospital, rather than having to travel to get on a clinical trial suited to them. The first trials are expected to be entered into the network by the end of the year.

Cathy Gilman, Chief Executive of Leukaemia & Lymphoma Research, said: “Thanks to 50 years of investment in research by Leukaemia & Lymphoma Research, a lot is known about the basic biology of blood cancers. We are now in a position to translate this knowledge from lab bench to bedside. Our investment will set in place a unique infrastructure to co-ordinate world class trials and deliver ‘Tomorrow’s Treatments Today’ – giving more blood cancer patients in Birmingham a future.”