Martin Mullaney, Birmingham City Councillor for Moseley and Kings Heath, has sent out an update on the seemingly never ending saga of the Victorian public baths on Moseley Road. He writes….

I visited Moseley Road baths on Friday to see what progress has been made on the following:

a) Replacing the lintel above the fire exit to Pool 2 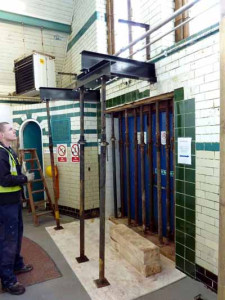 b) Replacing the bearings in the ventilation fans to Pool 2

Background to the pools temporary closure can be read at martinmullaney.blogspot.com/2011/03/update-on-moseley-road-baths-4-th-march.html

I attach two photos showing the work on replacing the lintel, both inside the building and outside.

The interior shot shows that the finishing touches are being made to the frame that will hold up the two load bearing pillars, when the present lintel is removed.

The exterior shot is not very good, but does show the hoarding around the works in the access road to the rear of the baths. 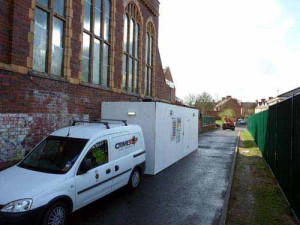 Hopefully next week, the corroded lintel will be removed.

The bearings on the ventilation fans have now been replaced and you now notice the difference straight away inside the pool. Before, whenever I visited this pool, my glasses would steam up with the high humidity – this was because the fans were rarely switched on, which in turn was causing the paint on the ceiling to peel and evidence of the early stages wet rot setting in.

With the bearings replaced, the ventilation fans no longer squeal whenever they are on and are therefore permanently switched on.