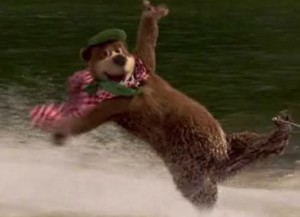 “Is that it?” My wife, normally the half of the partnership least likely to use such words as ‘extortionate’ and ‘how much????’ when buying items, looked at the meagre handful of coins she was getting in return for a twenty pound note, as handed over for me to purchase Cokes and bags of chocolates. She enquired as to what parallel universe we were living where these items cost so much before remembering we were in a cinema, the only place on earth that makes a Premier League football club’s food seem reasonably priced.

It’s half-term, so we were taking our Godchildren out for the day, complete with a 20 minute queue before we could get tickets for a screening two hours later. A further cost-related point can be made here. Cineworld at Touchwood have two showings a day of the ordinary, 2D and cheaper version of this film – one in the morning and the other at 12.25. Neither are exact child-friendly times, so anyone who wanted to feed and watch the film had no choice other than to go for the more expensive 3D version. A cynic may raise an eyebrow at this point.

And there’s no getting away from the fact that this is an expensive afternoon out – three adults and two kids will spend the best part of forty pounds even before the previously-mentioned overdose of E numbers. And this for a film which by my reckoning clocked in at 73 minutes from start to credits rolling. That football match is starting to look like even better value.

Scrooge-like tendencies aside, Yogi’s a genuinely enjoyable family film despite the poor reviews. As you’d expect, the plot is fairly basic and will win no awards for surprise elements. Jellystone, and don’t pretend you don’t know what it is, gets threatened with closure by unscrupulous politician (surely some mistake – what politician would think of selling off woodlands?). Yogi shows he’s smarter than the average, messing up in the process, has an attack of conscience and saves the day while helping Ranger Smith get the girl. Pretty straightforward, as you’d expect. Kids will enjoy the action bits while there’s enough wisecracking for adults to get involved, too, which is presumably where the film is pitched, letting parents prove that cartoon characters ain’t what they used to be.

The 3D effects, to be honest, are a bit wasted. They add little to the enjoyment of the film and seem there for the sake of it, a talking point rather than a feature. In fact, their best use was during an advert beforehand. But they helped keep the junior members of the audience quiet, and that’s good value at any price.