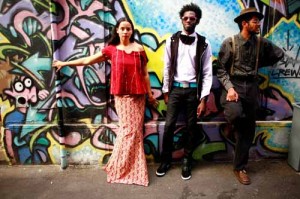 What’s the difference between country blues and country country? How do we separate hillbilly clunking from Delta sliding? Does the banjo solely descend from the West African n’goni? The Carolina Chocolate Drops engaged with certain aspects of these questions at strategic points throughout their set. The ethnicity of performers does admittedly place a different slant on the presentation of particular musical genres. Having heard their recorded works, and witnessed the Drops in 2010 at Harlem’s Schomburg Center For Research In Black Culture, I’d considered that much of their chosen material inhabits the blues songster book anyway. From The Memphis Jug Band to Taj Mahal. And so it does. But they also play Johnny Cash. And an important influence on their Piedmont string-band sound is 93-year-old North Carolina fiddler Joe Thompson, one of the few surviving founding fathers of black American hillbilly music. The Drops used to regularly attend the Thursday night jam sessions, held at his house. Anyway, banjoman and guitarist Dom Flemons is quite capable of holding court at the Terra Blues bar on Bleecker Street, and has played solo sets there on several occasions.

The Drops confronted the little-acknowledged memory of NYC’s slave trade, they joked about black folks feeling guilty about digging hillbilly music, and they even sport a band-name that flies straight out of the 1930s. Matters ain’t as clear-cut as they used to be, and the Chocolate Drops exist to underline the complexities of musical lineages. They also exist as virtuoso entertainers. And they exist to have a good time. It certainly didn’t take them long to rouse an initially taciturn crowd.

This gig was part of Lincoln Center’s annual American Songbook series, which is held in the concert space with the best view in New York. The Allen Room’s tiered seats look down on Columbus Circle, and the south-west corner of Central Park, with its stage sat in front of this huge, windowed backdrop. The band were clearly impressed, as every first-time visitor is similarly awed.

The three Drops spent much of their set swapping instruments, setting in motion a constantly changing combination between vocals, banjo, fiddle, guitar, kazoo, snare drum, cowbone-percussion and jug-huffing basslines. All three are strong’n’fine singers, harmonising with keen resonance. Rhiannon Giddens is probably the most individualist vocalist, but Dom Flemons has a more nonchalant old-time raconteur’s delivery.

Actually, on this occasion the Drops trio were augmented by NYC resident Hubby Jenkins on guitar and mandolin, for reasons which became clearer at the end of the night. He sat out on many of the songs, as did third member Justin Robinson. The repertoire doesn’t necessarily require all of the band players to be active all of the time. Jenkins clearly hadn’t had chance to induct himself fully, and appeared as a cautious outsider, often fulfilling a rhythmic role. The core Drops have been recording and touring together for six years, and it shows in their intimately natural performing rapport.

Audience participation is a significant part of their show, but the band conducts this in such a way that even those who tire of such moves can’t help but be impressed. The singalongs are genuinely part of each song, the clapping accompaniment springs out organically, as Giddens and Flemons adopt a well-whittled sense of wit, balanced with a certain amount of historically explanatory backgrounding. The songs have an uncompromised folkloric authenticity, but the entire experience can also be viewed as accessible entertainment. For a couple of songs, Giddens moved side-stage for a bout of spirited flat-footing, and Flemons was also adept with the occasional outbreak of guitar-twirling whilst hoofing.

The waters were further swirled around when the Drops presented their string-band re-interpretation of Blu Cantrell’s 2001 R&B number “Hit ‘Em Up Style (Oops!)”, as Robinson’s jug-buzzing technique was switched to close-miked beatboxing, and Giddens demonstrated a much more intense vocal delivery when compared to their album version. She’s inhabiting the song completely now. This same comment could be made about the repertoire in general. Months of persistent touring have honed these numbers into entities that far surpass their studio incarnations. Further favourites stomped on by, with spirited renditions of “Georgie Buck”, “Snowden’s Jig” and “Cornbread And Butterbeans”. The American Songbook set-list wasn’t adhered to strictly, as the trio threw in a few extras. One of these was “Jackson”, as performed by Johnny Cash and June Carter. A typical mash-up of the Chocolate repertoire.

Right before the encore, Giddens announced that this was to be Robinson’s farewell show, as he’s grown weary of touring rigours, and needs to devote more time to peaceful pursuits. It seems likely that he’ll still pop up in a guesting capacity, this being an amicable sundering. Fittingly, the remaining pair presented Robinson with a giant version of the hand-made clay jugs that the band sell to their fans. Finally, the trio sang an a capella version of the old gospel chestnut “Travelin’ Shoes”, to guide Robinson on his new path.

So, it turns out that Hubby Jenkins will be one of two replacements, the other prospective band member being human beatboxer Adam Matta. He’s also from NYC, and works with the Luminescent Orchestrii, with whom the Drops have recently recorded a joint EP. The innate chemistry of the Drops will be altered, but hopefully a new combination will become equally potent over the coming months on the road.

With Roomful Of Blues, any changes arrive via slow evolution rather than any radical stylistic swerving. For over four decades their stance has remained firm, with a zealous dedication to jumpin’, swingin’, jazzy, rock’n’rollin’ blues. If anything changes, it’s the line-up, not the musical mission. So, even though these New Englanders play once or twice a year in NYC, this gig at B.B.’s provided a first opportunity to check out their new singer, and to relish the prospect (and contents) of yet another album, Hook, Line & Sinker.

Guitarist Chris Vachon is a primordial force at the eight-piece combo’s core, his roiling guitar solos always bullishly forcing themselves to stage-centre. The key to Roomful’s strength is the way in which Vachon alternates with the horn section in providing the focus-of-the-moment. An acidic guitar break is invariably answered by either a solo saxophone or trumpet outburst, or maybe a joint slug of good-time reed/brass riffing. Singer Phil Pemberton might look like a restaurant manager, but he provides the personal face of the band, his voice reaching out to involve the audience. High soulful emotion is his speciality, rather than gruff blues brawling. It’s eminently suitable for most of the Roomful’s current repertoire. This is not a band that pauses for ballads. The closest they came to a slowie during their 90 minute onslaught was Vachon’s guitar feature, where the horns stepped off-stage for a break. This might have taken the pace down, creating more space in the sound, but it didn’t relinquish any of the night’s crackling energy.

Another regular visitor to NYC, and B.B.’s, is Buckwheat Zydeco, who always prefers to pack ’em in with two separate sets in one evening. This qualifies as unusual activity in this particular club. Upon arriving at 8pm, there was an unannounced opening act already in motion. Professor Louie & The Cromatix, from upstate Woodstock presented a rocked-up mulch of New Orleans influences, playing for around 15 minutes more, warming up the crowd for Buckwheat. After a short break, the headlining band came on, with their Lafayette leader not yet appearing. The opening numbers revolved around the blues, in high contrast to the anticipated zydeco. This part of the set was where the band’s lead guitarist stung out with an alarmingly pointed attack. Eventually, Stanley Dural Jr. (aka Buckwheat) entered the fray, given a helping hand by his frottoir-playing son Reginald, who helped him strap on his accordion.

Now came the hard stuff: the earthily jumping zydeco, with blues remaining as an important ingredient, but taking a few steps into the background. This was now the time for accordion and frottoir (rubboard) to dominate, even if the Buckwheat style always includes a larger than usual degree of mainline New Orleans rock’n’boogie. The set was hampered by a deep uncertainty that may (or may not) have sprung from technical problems, possibly even a lack of soundcheck. Once Buckwheat and his players had settled into their springy groove, the results were positive, but this had to be one of the briefest sets known to mankind, with the leader himself barely onstage for thirty minutes. Whether weary or lazy, it’s hard to establish, but it has to be hoped that the second set’s crowd received a better deal.