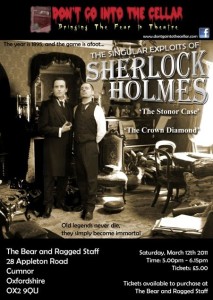 Birmingham-based Theatre Company “Don’t Go Into The Cellar!” is bringing a series of gripping Victorian capers to venues across Birmingham this Spring. Shows such as “The Singular Exploits of Sherlock Holmes”, “Tales for a Winter Night” and “Sharing Digs with Burke and Hare” will combine thrills, chills and comedy, capturing the ghoulish spirit of Victorian melodrama and Music Hall that have captivated generations of audiences.

The company stage quirky one-off shows and themed evenings at unusual venues, often with a ghostly connection. Previous highly successful shows were performed at The Old Crown in Digbeth, The Old Joint Stock Theatre and The Holly Bush. Following success around the UK, local actor Jonathan Goodwin returns to the region in both writing and performing capacity. Birmingham-born Gary Archer handles the acting and New Media duties.

Company Director Rachel Green has been delighted with the enthusiastic reception the productions have received. She says, “We specialise in bringing the classics of the Victorian horror genre to life, with striking adaptations that contain laughs and chills in equal measure.  We are always looking for venues that little bit different, whether they be old buildings, cellar spaces, cemeteries or haunted houses!”

The Sherlock Holmes stories have gained a new lease of popularity recently with the BBC’s acclaimed update and the Hollywood blockbuster starring Robert Downey and Jude Law. Don’t Go Into The Cellar! plans to stage further Holmes-based adventures later in the year, in addition to shows based on Spring-Heeled Jack and Varney the Vampire. 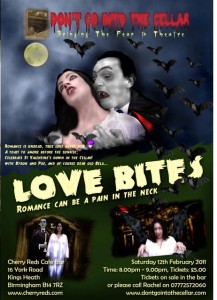 “Love Bites” will be performed at Cherry Red’s in King’s Heath on Saturday 12th February. Shows start at 8pm. Tickets cost £5 each and can be obtained by contacting Rachel Green on 07772 572 060 or by emailing thebestcellar@gmail.com.

“The Singular Exploits of Sherlock Holmes” will be performed at The Bear & Ragged Staff in Cumnor, Oxfordshire, on Saturday 12th March at 5pm. Tickets cost £10 and can be purchased by contacting Mark on 01865 862 329.

Further information about the theatre company can be found on their website, www.dontgointothecellar.com. Alternatively, email thebestcellar@gmail.com or call Rachel on 07772 572 060.